Why Does My Cat Keep Sneezing? 11 Potential Reasons 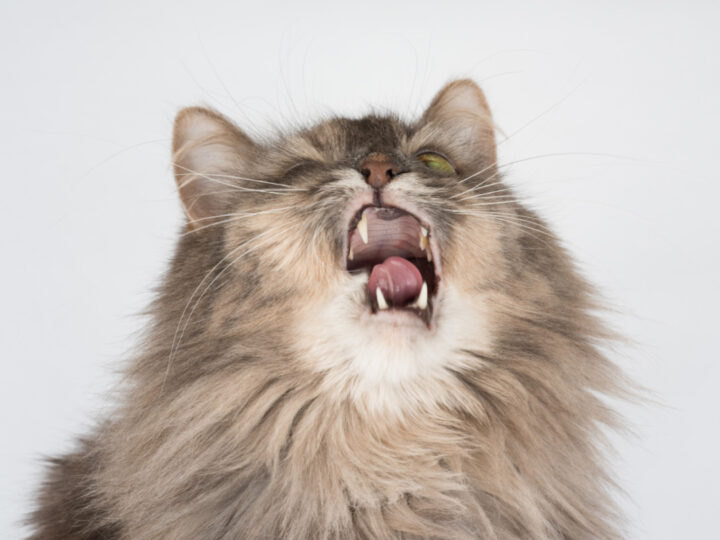 There are as many reasons for cats sneezing as there are cat videos on YouTube. But we can cut down on those reasons by saying upfront that we aren’t talking about the occasional sneeze here.

Maybe you have witnessed a significant sneezing fit, or perhaps your cat has been sneezing incessantly over the past day or two; it could indicate an underlying issue. Nobody likes to be caught in an unending torrent of head explosions (sneezes can feel like head explosions sometimes). So why does my cat keep sneezing?

Since cats can’t tell us what’s wrong, monitoring and understanding the visual signs are essential.

Indeed, an occasional sneeze from a cat looks amusing. And some of the causes are simple and fixable. But prolonged sneezing may indicate an underlying issue/cause/illness that requires a visit to the vet.

What is a Normal Sneeze?

When you have a cold, this is the body’s way of getting rid of excess mucus from those passages, for example. People who suffer from hay fever know all too well that spores irritate the membranes, driving them to the point of near-madness.

Under normal circumstances, cats generally sneeze for the same reasons humans do. Something has irritated the nasal passage, usually, and a cute “achoo!” accompanied by a shake of the head takes care of that.

But in cats, a persistent sneeze can indicate an illness or other condition, especially if it’s accompanied by other symptoms. Lots of people refer to “cat flu” as one example (see below). But that is just one possibility.

Keep in mind that any bout of severe sneezing needs to be monitored to find what’s causing it. You will want to explain as many details as you can to a vet, should you need to visit one.

Other Symptoms: What to Look For

When your cat sneezes, offer a “Bless you!” – they will appreciate it. Then, if you feel that the cat is sneezing abnormally much or intensely, try to see if any of these other symptoms are present:

As we move through some of the leading causes of sneezing, some of these symptoms may come into play.

Why Does my Cat Keep Sneezing?

It’s not exceptionally uncommon for cats to develop sneezing afflictions, and cat shelters often have isolation rooms for sneezy cats. Some of the below reasons for that sneezing may explain why:

As with human flu, cat flu brings on sneezing, watery eyes, and the dreaded runny nose. In most cases, cats from good domestic situations are vaccinated against cat flu, although it can still occur in rare cases.

Cat flu usually occurs in young cats and tends to be a common occurrence in cat shelters. The tendency for cats to become carriers of viruses (without symptoms) makes it hard to eradicate the viruses.

That said, early vaccinations are the best preventative action pet parents can take.

Herpesvirus and calicivirus are two examples of common culprits when it comes to upper respiratory infections (URIs) in cats. Several other less common viruses can be present. But in general, viral infections cause symptoms that include sneezing.

Viruses are infectious and are usually passed from cat to cat. Some viruses are carried for life in a dormant state. For example, Herpesvirus will always be in a cat’s system after contraction, although it may not activate again.

Feline calicivirus is an infection that often shows as mouth ulcers. However, it can also affect the respiratory system of cats.

Fortunately, most such URIs run a course and can be treated with some minor care at home. However, a URI can sometimes become more serious and require veterinary attention. Antibiotics are usually prescribed for treatments of viral infections.

Cats are highly sensitive to environmental contaminants. They can also manifest allergies to the oddest things, a lot like humans. Here are a few irritants that might cause sneezing in the feline member of your family:

If an irritant is involved in your cat’s sneezing, it’s best to trade it out for a less-triggering situation. In other cases, you may need to ask a vet if there’s a suitable medical remedy for your situation.

As odd as it may sound, sneezing can be a side effect of dental disease or disorder. Any infection of that general palate area may also affect the respiratory membranes that lead to sneezing.

It’s best to visit the vet to determine whether your kitty has a tooth or gum disease. Regularly offering dental treats can also help to keep your cat’s mouth healthy.

People with children may be all too familiar with the dreaded object stuck up the nose. This can also happen in cats, especially those who love to wander around outdoors love to smell things, roll in the dirt, and play with various objects. And some of these objects can end up in their nasal passages or throat.

Bits of plants or dirt lodges in this way can cause major sneezing fits. In many cases, once the offending object is dislodged, the sneezing will alleviate.

Cats are interesting animals and sometimes suffer side effects after medical treatment like annual shots and vaccinations. Sneezing could be amongst these side-effects, especially if medication has been administered via the mouth or nose.

Sneezing is usually nothing to worry about. But there are unusual and rare, occasions where you will need to take note of a persistent sneeze accompanied by other symptoms. This could indicate a more serious underlying issue. Here are a few examples:

Feline Leukemia is often a fatal condition. Its symptoms are varied and can range from almost no signs at all to any serious symptom imaginable. Among these, sneezing can result from the respiratory system being affected.

In cats, chlamydial conjunctivitis affects the eyes and the respiratory tract and causes sneezing, among other things. If left untreated, the bacterial infection spreads to the lungs.

An ophthalmic ointment may alleviate some monitored conjunctivitis, but it’s best to defer to a vet’s advice if unsure.

Bordetella is another bacterial infection that is highly contagious. Additionally, it can be spread between species – in this case, cats and dogs.

Fortunately, most healthy cats will survive infection without too much discomfort. Animals that come from shelters or other high-population contexts are more susceptible to exposure.

Previously, this bacterial infection was known as feline infectious anemia or hemobartonellosis. Fortunately, it is very uncommon these days. This particular bacteria break down the red blood cells and result in a type of anemia. The mucus membranes may become affected by the condition and cause sneezing.

Nothing to Sneeze At – A Conclusion

In most cases, a cat sneeze is nothing to worry about and is perfectly normal. Like humans and the common cold, even most viral infections will run their course and may be treatable with proper care and time.

If you notice a number of the accompanying signs as listed above, you may need to take more action.  Keep a particular eye out for excessive discharges, long bouts of listlessness, and general malaise. If you suspect a more serious underlying problem, don’t hesitate to ask a vet.

Beyond that, rest assured that a sneeze is a body’s way of attempting to rectify itself, or at least rid itself of some unwanted presence. At the very least, that presence isn’t you.

Can you catch a Cold from a Cat?

This why does my cat keep sneezing post contains affiliate links. That means if you click through and make a purchase I will most likely receive a small commission. This won’t affect the price you pay. Just wanted to make sure you knew.

27 Best Cat Ornaments You'll Love
← Previous
Can Cats Get Colds? What all Owners Need to Know
Next →