Why Do Cats Roll in the Dirt? 9 Reasons for Dust Bathing 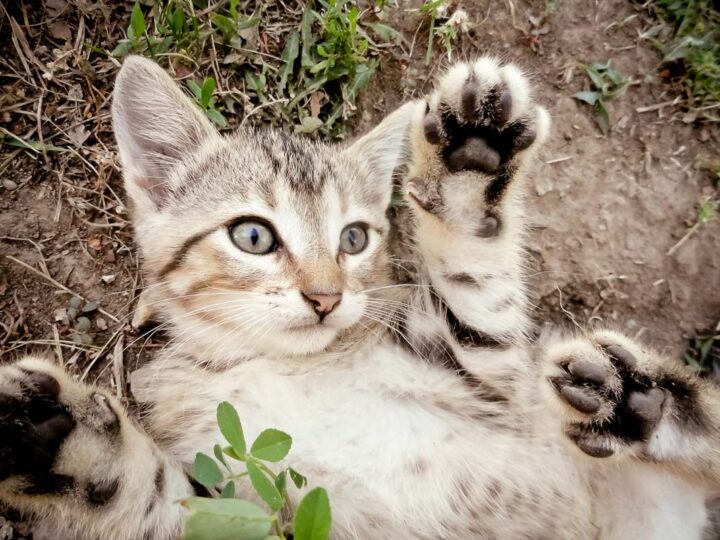 Why do cats roll in the dirt? Have you ever looked out into the garden to see your beloved purrfect kitty rolling gleefully in the dirt? The complete opposite of seeing your fur baby neatly sitting, licking themselves clean, or admiring your grooming efforts? What’s going on?

While our fur babies have dust baths and we fear for their beautiful silky coats getting dirty, they have good reasons for doing it. It may seem a bit odd, especially with all our caring efforts; however, it’s actually a good way for them to care for themselves.

So, unless you have a full-time indoor cat breed, let’s take a peek at some reasons why cats roll in the dirt when they get outside.

Why do Cats Roll in the Dirt?

Cats often roll in the dirt to keep cool. Your kitty can have a higher body temperature, from sunbathing or sleeping near a heater. You may notice your cat laying in the dirt a bit more than usual during those hot and sunny days.

There’s a cool soft layer underneath the bare earth, and when it’s freshly dug up it’s much cooler than on top. On a sunny afternoon, after playdates, you’ll find your kitty rolling in the dirt to cool down.

If you see your cat taking frequent dust baths whenever given the chance, or on hot days, make sure you provide other ways for them to cool off. You can have cold water points around the house or even a fan.

If your cat is rolling over onto its back, it is doing so because it feels safe. Cats mostly roll over when they are in their most relaxed state – almost like kitty zen mode.

When they are exposing their sensitive parts, like their belly, they are in a vulnerable position, giving opportunity for both of you to bond. If your cat is rolling over in front of you, consider this a good sign. It’s the cat’s way of saying, “I trust you, I feel safe”.

If your cats have been playing with catnip, a catnip toy, or in your catnip garden, chances are they’ll be rolling in an ecstasy of dirt. Rolling around can be a side effect of the ‘high’ feeling your kitty gets from the substance in catnip.

Remember catnip is like cannabis for cats, with the active ingredient known as nepetalactone.

When a cat inhales catnip, it exhibits some weird behaviours like licking, head shaking, body rubbing and sniffing. So, rolling on the ground can also be an effect from catnip.

Catnip is non-addictive and harmless. It helps your kitty relax and feel calm, so there’s nothing to worry about – unless you’re needing to groom a Persian cat.

Psst… Be warned; if you have a catnip garden, you should expect to have plenty of visitors from neighbouring furry friends who will be attracted to the smell.

Our kitties are smart. If you see them rolling in the dirt, fear not. They could also be caring for their digestive systems. Their coats often pick up bacteria from the soil. The next time they groom themselves, they ingest these bacterias by licking.

This is one-way cats can supplement their guts with good bacteria, maintaining their gastrointestinal tracts. This also plays a vital role in their food digestion. Therefore, your cat rolling in the dust can be good for their health.

Cats may roll over onto their backs to get your attention. If you’re getting ready in the morning and your cat flips over at your feet, this can be a sure sign your cat is looking for your attention.

Unlike dogs, who may rollover as a sign of defence or submission, your kitty could do it for solicitation of attention. Cats will often do this to indicate that they are feeling sociable and friendly and may even rub their head on the ground. However, as our felines are finicky this doesn’t necessarily mean that they want to be touched.

Giving your kitty attention once it’s rolled onto their back will reinforce their behaviour, and they’ll do it again. After that, your cat may repeat the movement to be awarded attention.

Your fur babies thrive on routine, so once you’ve established a pattern, rolling over becomes a comforting custom, even if it’s in dirt.

Sometimes, you’ll find that female cats often roll around and rub against things when they are in heat or after mating. On the other hand, their male counterparts are found rolling on the ground when they are around other male cats.

However, if you find your female cat rubbing herself on things or rolling around, it could be related to hormones and ovulation. They tend to roll on the ground to spread their pheromones and to transmit their odour and attract potential mates nearby.

Your garden is your kitties’ Eden. Rolling in the dirt in the backyard is a way of entertaining themselves. The same way they like climbing trees, up fences, or along walls.

They could be trying to send a message to their owners to invite them to rub their bellies, or to play. On the other hand, they could also be merely communicating that they are super comfortable and want to take a nap.

Cats primarily communicate through smells, and by rolling on the ground, the cat can spread its scent. They do this by using their scent glands on their paws, flanks, and cheeks. This behaviour is often seen in both large cats and domestic cat breeds.

When your feline is rubbing their face on the floor its leaves scent markers around the house to tell other cats that they’ve been there and it marks their territory.

A very simple reason why cats roll in the dirt is that they could just have an itch that they can’t reach. To relieve the itchiness, they will move in the soil on their backs. Many pet owners will get scratch houses, or an arch scratcher, etc. to help their kitties with the itch.

If this continues, you should try to find out what exactly is causing that itchiness. This could be several things like fleas, ticks, mites, or other small parasites. Try looking out for any growths or scabs on the skin, too.

Can I stop my cat rolling in the dirt?

A Footnote on Kitties Dust Bathing

There are many reasons why your feline is rolling around in the dirt. Lying on the ground is not a bad thing, luckily. And every kitty has their reasons for doing so.

The next time you see your fur baby doing the drop and roll, know that it’s nothing to be alarmed of. It’s healthy for your kitty to dust bath. So relax, stand back, and adore your kitty doing their natural thing on the ground.

Please Note: This Why do Cats Roll in the Dirt post contains affiliate links. That means if you click through on most of the links and end up making a purchase I will receive a small commission. This will not affect the price that you pay. I wanted to make sure that you were aware of this.