10 Types of Siamese Cats – Which is Best for You? 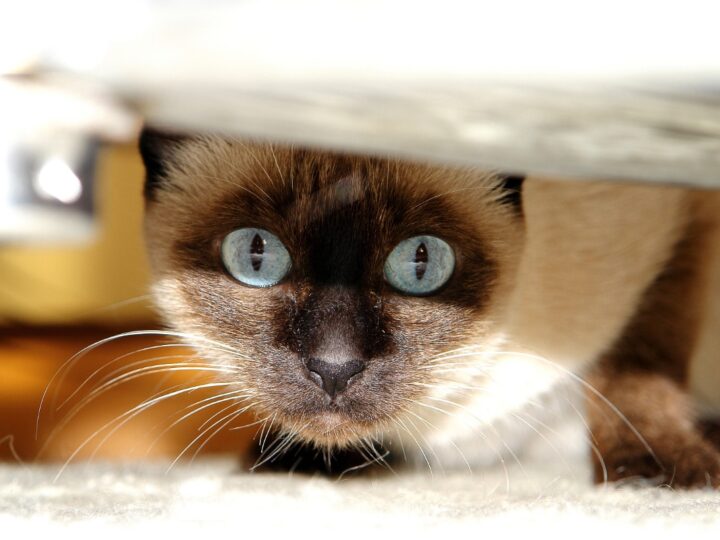 Hailing from Thailand, Siamese cats have become famous for their peculiar looks and distinct personalities, which has made them one of the most expensive cat breeds. Over the years, cat breeders have introduced new types of Siamese cats that are sought after worldwide.

There are ten types of Siamese cats, with variations in colors and patterns. When deciding if you want to get a Siamese kitty, it may feel overwhelming due to the number of options available to you.

That’s why I’m going to explain the history, defining features, and differences of each type of Siamese cat, so you’re perfectly prepared to choose the finicky feline that is best for you!

While the types of Siamese cats can be classified depending on the size of their head, tails, and pointed patterns, there are two broad types of Siamese: traditional and modern.

Becoming popular in Siam during the 14th century, there are plenty of ancient hieroglyphics at Old Thai temples that show us how admired these felines were even back then.

An old tale explains why their tails are crooked, but whether you believe this myth is up to you. The myth explains that Siamese cats were given the responsibility of protecting royal goblets within the Siam kingdom. To do so, they wrapped their tails around the precious objects, which gave them the crooked tail they now have today.

The myth also states that Siamese cats got their cross-eyed look because they would stare incessantly at the goblets, giving them their crossed eye look.

The traditional types of Siamese cats only have light-colored coats that are covered by dark areas on their paws, face, ears, and tail. The color contrast of traditional Siamese cats is referred to as a seal point.

Due to selective breeding, modern Siamese cat varieties come in many different colors, including blue, chocolate, and lilac points.

Below you’ll find more information regarding the defining features of each traditional Siamese variant and what sets them apart from each other.

Famous for their athleticism, Classic Siamese cats have long bodies and tails, which is a key differentiating factor. Unlike the other types, Classic Siamese Cats don’t have a noticeable dip in the nose.

Genetically, this type of Siamese cat is very similar to the other traditional types, but their physical attributes make them visually different.

First appearing in Siam during the fifteenth century, Classic Siamese cats were introduced by the Cat Fanciers’ Association into the Advanced New Breed category in 2009. They have a smooth body with a rounded head, piercing blue eyes, and the classic dark points that stand out against their cream-colored body.

Known as the quieter version of the traditional Siamese cat types, their face is rounded like an apple which acts as their most distinguishing feature. In terms of coloring, Applehead Siamese cats have the original dark brown-black points, like the other traditional types. They have bigger bones and a muscular body that can weigh up to 18 pounds.

Like the Classic Siamese cat, Appleheads are athletic, but their tail is relatively shorter than the other traditional variants. The most noticeable behavioral difference is their quiet nature. They are less chatty, making this type of Siamese variety a perfect choice for someone who wants a cat that is less vocal.

Old-style Siamese cats have a medium-sized body and gained popularity during the 1950s and 1960s. Their facial structure is a mixture between the Applehead and the modern, Wedge Siamese cat.

They have ears that are broad and a nose that is shaped like an almond. The cross-eyed trait is very apparent in this type of Siamese cat. When comparing this type to other traditional types, you’ll notice that Old-style Siamese cats have longer faces.

Their body is longer and less bulky than the Applehead, but still not as thin as the modern Wedge Siamese. Their balanced look makes them an incredibly beautiful feline specimen, which explains why they became so popular in the ‘50s and ‘60s.

Modern breeders are starting to make an effort at returning this look, so visit the Old Style Siamese Cat Club you’re in the UK and PREOSSIA if you’re in the USA.

When Siamese cats were introduced to Western societies, they quickly became fashionable pets. Since then, modern variants have been created that differ to the traditional types in terms of their physical appearances.

The bodies of modern Siamese cats are longer and thinner than the traditional types. Modern Siamese varieties love to talk. If you bring home one of these cuties, you should expect to hear their loud and distinct meows throughout the day as it follows you everywhere around the house.

Years of selective breeding between the 1960s and 1980s have created the Wedge and light-colored types of Siamese cats. The physical appearance of these cats differs significantly from the traditional types, as breeders chased a specific aesthetic.

While their appearances are different, modern Siamese cats have the personality traits that all Siamese cats are known for: intelligent, affectionate, needy behavior, gentle and talkative.

Getting their name from the wedge-like shape of their head, these cats are the most extreme type of Siamese cat you’ll find. Their physical appearance is very different to the traditional types of Siamese cats. They have a lean and muscular body with long legs, thin tail and wide ears that sit on top of a sharp, long face with slightly slanted eyes.

They are also the loudest type of Siamese cat, just ask any owner of a Wedge Siamese and they’ll tell you all about their cat’s chit-chat! So it’s normal to hear them meow a lot throughout the day.

Due to selective breeding practices, Wedge Siamese cats are more susceptible to health problems, like kidney disease. Due to this, owners should always ensure they feed their Wedge Siamese cat healthy, high protein cat food.

Owners should also make sure to have plenty of cat toys like fluffy mice, scratching posts, and climbing trees. This makes for a home environment that keeps them occupied and stimulated while getting plenty of exercise.

Breeders have not only managed to change the physical appearance of Siamese cats through selective breeding. These can be broken down into three subcategories:

These cats are lighter in colour but will darken as they age.

These Siamese cats have grey/blue tones in their fur and hints of lilac and pink thus the name.

This is a very light shade of brown for Siamese cats.

The blue of a Blue Point is actually a dark shade of grey with a tinge of blue highlighting its blue eyes.

A very rare type of Siamese cat, this type has orange and crimson shades to its fur.

For more information on the various colors amongst modern types of Siamese cats, check out my other post about Siamese cat colors.

1. How Long Do Siamese Cats Live?

Siamese cats have one of the longest lifespans of all cat breeds. Some live as long as 25 years. The average life span for a Siamese cat is between 12 and 20 years.

2. Why do Siamese Cats Bite so Much?

Siamese cats can get very worked up during play time. When Siamese cats get over stimulated they may try to bite your arm or hand.

3. At what age do Siamese cats calm down?

Siamese cats are somewhat hyperactive by nature. However, once they reach two years of age they tend to mellow out a bit and calm down.

Siamese cats actually do like water. They may not want to be fully submerged in water but they enjoy playing with water and being around water.

5. Do Siamese Cats shed a lot?

Siamese cats do shed and tend to molt twice a year in the spring and fall. However, Siamese cats tend to shed a lot less than other breeds, particularly long-haired breeds like Maine Coons and Siberian cats.

Siamese cats tend to love the outdoors. Roaming and hunting are in their natural instincts. It is definitely worth getting your Siamese cat an escape-proof harness and embark on trying some cat walking. They are a highly intelligent breed and can be trained to walk – if they want to.

7. Why do some Siamese Cats have cross eyes?

For many years, most Siamese cats had cross eyes. Whilst this is most likely due to their genes, I prefer the more interesting explanation. Legend has it that Siamese cats were required to guard a golden goblet. Apparently, their eyes focussed so strongly on the golden goblet that it led to them having cross-eyes.

Today, fewer Siamese cats have cross eyes as breeders have chosen to try to rid the breed of this characteristic.

Summary of Types of Siamese Cats

While the physical appearance of each type varies, the personalities of Siamese cats are largely the same. So keep this in mind when deciding whether a Siamese cat is the best choice for your lifestyle and home.

With all things considered, if you adore cats and you’re looking for a cat that will love you dearly, then you can’t go wrong choosing any type of Siamese kitty.

Please Note: This types of Siamese Cats post contains affiliate links. That means if you click through on most of the links and end up making a purchase I will receive a small commission. This will not affect the price that you pay. I wanted to make sure that you were aware of this.

Great post. Thanks for all the info. I have a beautiful Seal point.