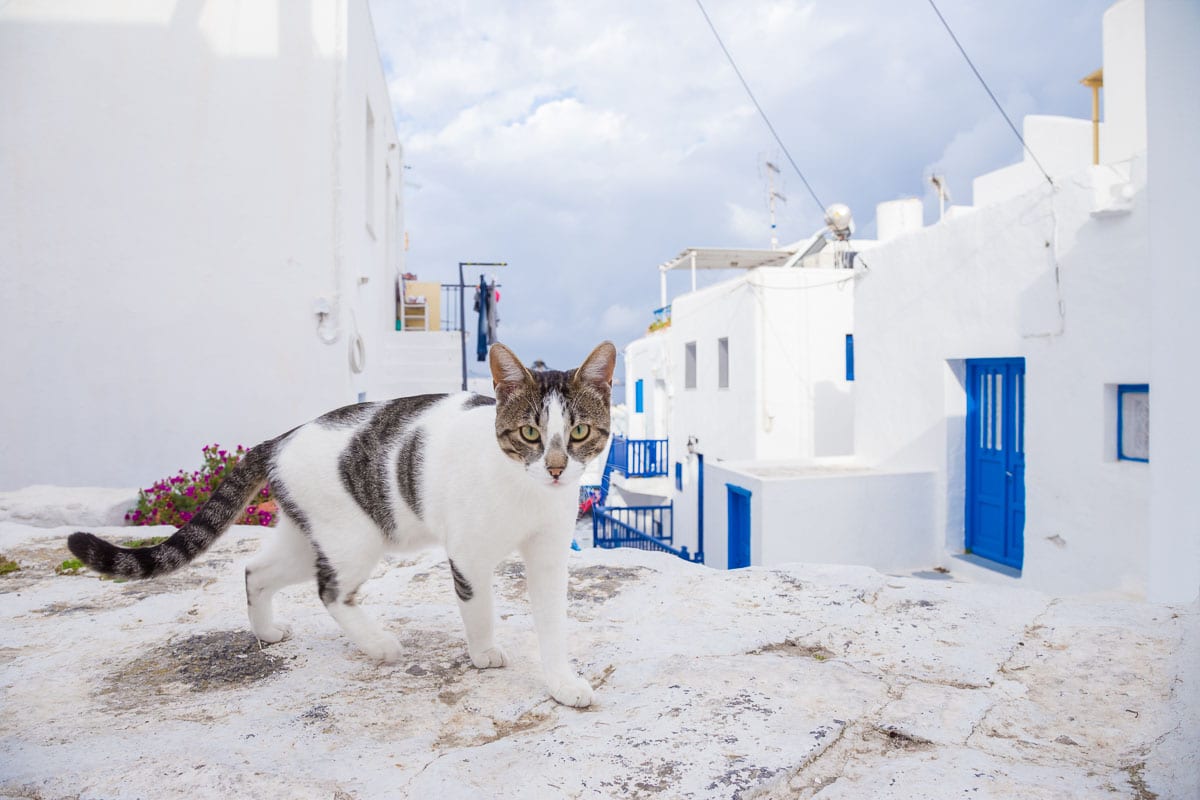 You’ve made the big decision to get a cat – or you have decided to expand your kitty family. You’ve chosen the breed or decided on a moggy – and now comes the hardest decision of them all – what will you call your new feline?

Greek cat names are a terrific option – but there are so many from gods to goddesses to greek places and food plus standard greek names – how on earth do you choose?

The good news is that I have done some of the hard work for you and have reduced the number of potential Greek cat names down based on some sound criteria about what can make for a good cat name.

Plus I’ll take you through some things to think about to help you decide which of those names is the best one for your new kitty.

Greek Cat Names – Will my cat even notice?

The study worked with 78 different cats across single and multi cat homes as well as in cat cafes. The study found that most cats are able to distinguish their names from similar sounding words and from other cat names.

A big fluffy cat calls for a name that says big and fluffy with rounded “O”s like Cosmo. And the color of your cat or its markings can help you make a choice. If your cat looks like a little lion then maybe a name like Leo or Hercules could be a nice fit?

Look at your kitty’s shape as well – is he sleek or solid? Pointy ears or flat back ears? Fluffy or sleek? Think about the concept of Onomatopoeia. This is when a word looks like what it describes.

A super active cat will seem a bit of a disconnect if it is christened Hypnos after the god of sleep.

If your cat is a Persian or a Siamese it may well suit a prince or princess name like Aphrodite. However, a small kitty breed may seem odd if called Maximus.

You will use your cat’s name an awful lot – so the fewer the syllables the better. Also, this will be easier for your cat to absorb and remember. Plus it is likely that you will be introducing your cat to friends, family, vets and others so a shorter name is easier for everyone to understand and remember.

If you call your kitty Muse the odds are that everyone will have extremely high expectations of your kitty. And if you use a name like Hermes you’ll constantly be torn about whether or not to pronounce the H – which could get embarrassing if you’re dealing with anyone in France.

And no one wants to be called Nike and face constant comparisons to the running shoe and again huge expectations of how quickly your kitty moves.

Nemesis could seem like a hilarious name when you first get your cat but you may well tire of using it and explaining to others that whilst you love your kitty you have given him a rather adversarial name.

Again it may seem very amusing to name your cat Chaos in its early days but does it really feel right to be having some loving time with your kitty and saying the name Chaos sweetly and without exasperation?

The key thing here is to avoid choosing a cat name that sounds too much like the name of another cat in your household as this may lead to confusion eg Sven and Ben.

How did some famous cats get their names?

The Grumpy Cat only became The Grumpy Cat after an image of her frown went bananas on social media. Her real name was Tartar Sauce.

Garfield was based on cats that creator Jim Davis grew up around. The actual name and personality came from Jim Davis’ grandfather, James A Garfield Davis. Davis described his grandfather as “a large, cantankerous man”.

Choupette Lagerfeld was given to Karl Lagerfeld by French model Baptiste Giabiconi when the kitten was 10 weeks old. Choupette is a common nickname in French for cute girls.

In ancient Greek the god of cats was known as Ailuros, as opposed to its Egyptian cat name of Bastet. Bastet was originally represented as a lion but was later somewhat pacified to become a cat.

Greek mythology refers to the gods that were led by Zeus and they do have some rather fabulous names (complete list is further below). However, many of them are very tricky to pronounce so immediately get removed based on my criteria.

Short, sweet, to the point, mother of earth – perfect for an authoritative female cat

God of them all! And a good easy pronounciation.

Goddess of nature – perfect for a female who loves being outdoors. I’m seeing a furry cat for this one – Siberian or Maine Coon – someone with forest cat genes.

OK Santorini has more than two syllables but this is a word that runs easily off the tongue – and conjures up images of a stunning Greek island and beautiful sunsets. I quite like Mykonos as well.

Short, sharp and pretty – means enthroned – I really don’t get what that means – but it does make me think of Kyra Sedgwick as well who I love as an actress so it made my list

Love the “o” ending, short and sharp, means order and decency. And was the name of one of my favourite ever kitties who is no longer with us so a tribute vote.

A slightly strange original name about a large basket but now is about spirit. An easy one to say and spell. And quite cute.

It doesn’t get much shorter than this cute name for a female cat which means life.

Another multi-syllable flouting of my own rules but a bit like Santorini Calamari is so easy to say – and does convey that you love your kitty so much you could easily eat them.

And in case you don’t like my suggestions here are some long lists of potential Greek Cat Names by category:

Please Note: This Greek cat names post contains affiliate links. That means if you click through on most of the links and end up making a purchase I will receive a small commission. This will not affect the price that you pay. I wanted to make sure that you were aware of this.

Why Does My Cat Eat My Hair? 9 Reasons
← Previous
Why Do Cats Roll in the Dirt? 9 Reasons for Dust Bathing
Next →
Click here to cancel reply.