Are German Shepherds Good with Cats? What You Need to Know 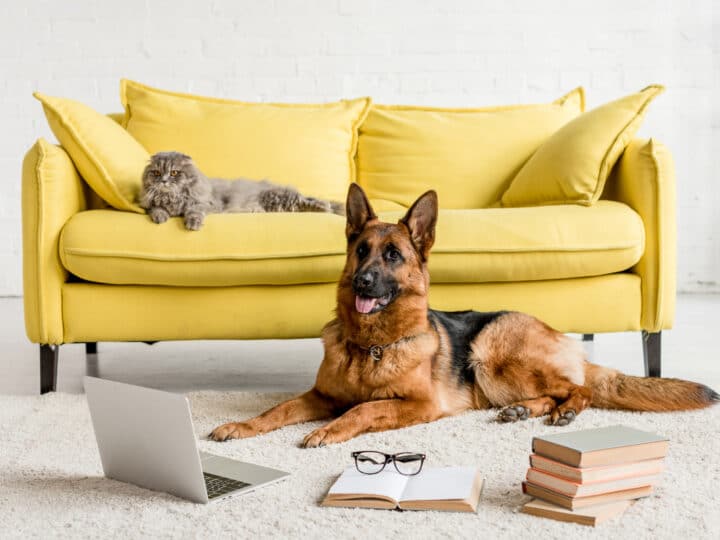 The battle of cats and dogs is as old as time itself. But is it true that cats and dogs can’t get along? They are very different species and both view the other as potential prey. But cats and dogs can get along – it is all about how the process of bringing these two species together is managed.

Breed can also impact how difficult it or easy it is for cats and dogs to get along. But are German Shepherds good with cats? The short answer is that they can be. So we’ll look at what factors will influence the relationship between a German Shepherd Dog (GSD), processes which can be followed to build that relationship and finally some troubleshooting with FAQs.

Different breeds of cats and dogs have different temperaments or tendencies. However, the reality is that any pet‘s ability to get along with others will depend on their training – particularly for dogs. Individual temperaments will play a role as well but are more likely to effect how long it takes the two to get on or how well they get on rather than whether they can get on at all.

As this is a cat blog, let’s start with understanding a bit more about the personality of German Shepherd dogs and how socialisation works for them and why it is important.

German Shepherds are one of the most popular dog breeds in America. These versatile dogs are intelligent and courageous. They are working dogs and tend to do very well at anything for which they are trained.

Despite their size, they can be sensitive and they don’t like being on their own. They are very affectionate family members and good with kids as well as strangers. GSDs are also high energy and love to play. They need a lot of exercise to stay happy and minimise bad behaviour.

As working dogs, it is in the genes of a GSD to help herd and keep the flock in line. They often round around flocks of sheep making sure they’re all okay and in line. Indeed, they will nip at the ankles of any lamb who strays from the group. In this way, their behaviour can be similar to terrier dogs like Jack Russell‘s who are bred to chase and catch animals.

So when a GSD sees a fluffy animal making quick moves eg a cat it will have a strong instinct to chase that creature and nip at its ankles. If you’re a cat owner, you know this type of behaviour will not go down well with your favourite feline. This is also why some GSDs can become a bit obsessed with a cat and follow them around.

However, GSDs can be trained to manage this natural instinct to prey. This can be achieved through socialisation.

The American Kennel Club says that GSDs are most open to learning how to socialise in their first three months. Without socialisation, a GSD will only know a small number of people. When it encounters others it will potentially be scared and uncomfortable.

Socialisation tends to increase a dog’s confidence. Learning how to deal with new situations helps them to develop belief in themselves – just like humans. Each new socialisation experience should make the one after easier.

Socialising a german shepherd dog can take many forms. It can include things like introducing your dog to new sounds, new sights, new objects and new places. Critically, this should include different people and different animals.

The younger both animals are, the more likely that they will be able to get along. Kittens and puppies, like humans, are far less set in their ways. When they are young both animals will be more likely to be curious and want to play – they most likely haven’t learned to be afraid of each other yet.

There is always the potential for older pets to get along or to mix an older pet with one that is younger, but this is usually an easier process when both pets are younger. If your german shepherd dog is older ask the shelter owner or previous owner if it has had any time around cats. And also ask if they have had any bad experiences with cats as this could have a major impact on their ability to get along with your cat.

How sociable are both animals? How much exposure has each animal had to other animals? An animal that has grown up on its own with a large amount of attention may struggle more to share their space and its owner’s attention with another animal. However, those animals with more experience of sharing and being around other animals may adjust more quickly.

Cats tend to be far more cautious than dogs – but of course all cats are different. What is your cat like in new situations? Is it quite bold or timid? It is important to take each individual animal’s temperament into account when bringing the two animals togehter.

As a working breed of dog, German Shepherds have a high prey drive. They will have a strong instinct to chase after fluffy objects, particularly if they make sudden moves. A German Shepherd with a higher prey drive will find it more difficult to get along with a cat and vice versa with a lower prey drive.

If the GSD is a bit older you or its owner will probably have a sense of how strong their prey drive is based on how they react to other animals on walks etc.

A GSD that has been spayed or netured will feel less need to show dominance to a cat.

Introducing a German Shepherd Puppy to a Kitten

The first step is to feed the two animals in close proximity to each other. However, put your puppy on one side of a closed door and your kitten on the other. It is unlikely that the two animals will be comfortable seeing each other at this point but they will start to pick up each other’s scent.

Don’t introduce the two animals until your puppy is able to follow commands to sit, stay and leave it. Once your puppy is at this stage try a 5-minute meeting while your puppy is in its kennel. Keep this up for a couple of weeks and each time gradually increase the amount of time that the animals are together until you reach 30 minutes.

If your dog becomes aggressive at any point in this process, remove the cat and yourself from the situation so that your dog learns that type of behaviour means it is left on its own.

Bringing a New Cat into a Home with a German Shepherd

A controlled introduction process is often the best way to manage to bring a new cat into a home that already has a GSD. Carve out some space for the cat such as a spare bedroom. Make sure this space is a safe place for your cat and also contains water, litter, toys, and other things that help a cat to feel comfortable. Start with total separation between the two animals.

The first and most important step in a controlled introduction is the swapping of scents. Have one clean cloth for your cat and one for you GSD. Run the cloth on the areas of each animal where there is the most scent. For cats this is the top of their head, cheeks and chin. For dogs this is their armpits and on their sides.

Once the cloths have captured each animal’s scent, place each cloth in the other animal’s environment. They should be left to discover this cloth themselves rather than you giving them the cloth. Watch how each animal reacts to the new scent. Does your cat become nervous? Does your GSD become over-excited?

Each day do scent fresh cloths again and leave them near the animals. Ideally, keep this up until both animals are calm around the scented cloths. Then you are ready to move onto having the animals see each other in a controlled way.

Have your cat inside the house and your dog outside with some type of door with glass on it between them so that they can see each other. Do this daily for about 5 minutes at a time.

After a few days do the same thing but inside the house. There will need to be some type of barrier between the two animals like a pet gate so that they can’t attack each other. If they behave well give both pets treats.

The final stage is interaction with no barriers. However, your GSD should be on a leash. Start off with a very short leash. Then extend the leash as your cat gets more comfortable and if your GSD behaves. Treats should be incorporated here as a reward for good behaviour.

Remember that your GSD will only chase a cat that is running. So it is important that your cat remains as calm as possible. It can be a good idea to start your cat off in a cat carrier in this stage and slowly remove them from the carrier based on your GSD’s behaviour.

Take your time on removing the leash completely. When you have come this far don’t rush to the final stage in case there is some aggressive behaviour. Allow your cat to lead the process here – is it comfortable? And make sure you stay in the room the entire time.

So Can German Shepherds and Cats Get Along?

The short answer is yes but. German Shepherd dogs and cats absolutely can get along but they are not guaranteed to do so. Much will depend on the temperaments and past experiences of each animal. However, as an owner there are many things you can do to encourage their relationship.

Start by following a set introductory process as above and following our key tips as you move through the different stages. Your pets will be best friends before you know it!

Please Note: This Are German Shepherds Good with Cats post contains affiliate links. That means if you click through on most of the links and end up making a purchase I will receive a small commission. This will not affect the price that you pay. I wanted to make sure that you were aware of this.