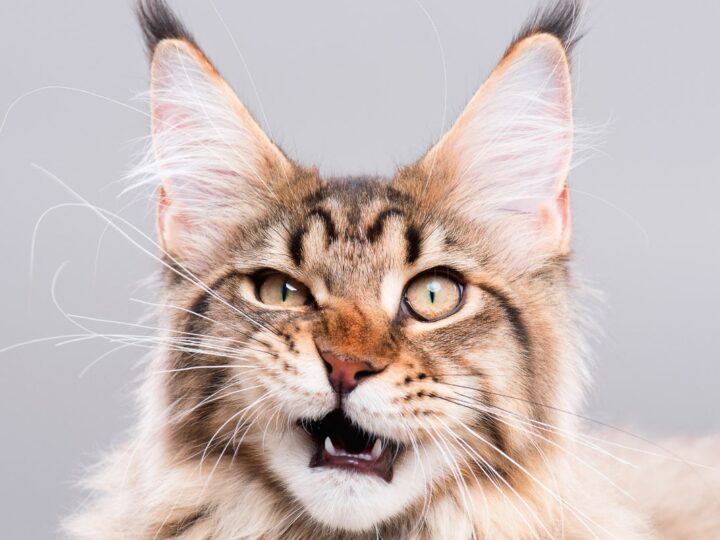 The glorious Maine Coon is known for being a beautiful semi-longhaired cat. It is large compared to most other breeds, making it seem rather majestic. This discerning kitty is a family-friendly, chatty and playful addition to any family.

The breed also happens to display a number of different colors and several different patterns. Let’s look at how we classify these, and what you should look for in Maine Coon colors.

First, it’s useful to know that Maine Coons are thought to be descended from Norwegian Forest Cats. If this is true, this accounts for their rich, lush coat, and size. They are now named after the state of Maine in the USA, the place they settled and originated from as far as modern breeders are concerned.

But beyond that supposition, little seems to be known – or at least confirmed –  about the cat’s origin beyond speculation. Some believe they are part angora, part tabby. Their unique personality certainly doesn’t give much away in this regard.

Because there seems to be no commonly accepted heritage story, the broad range of colors and patterns are all seen to be legitimate when it comes to Maine Coons. In other words, there is no breed standard when it comes to colors.

However, this breed happens to be the largest of the domesticated cats – from nose to tail, they come in at about 1m long (39.37 ″).

They also boast the title of the oldest natural breed in North America. Because of their long-standing history and far-reaching popularity, they’re known as ‘America’s Cat’.

There are two ways to describe a cat’s coloring. Color obviously refers to the actual color, while pattern refers to the way those colors display. Think about patterns referring to the shapes of the color segments of a cat’s coat. In cats, we recognize a number of patterns. Here are the Maine Coon’s common patterns, all of which are fairly common.

Shaded usually indicates a solid single color, but with varying degrees of intensity in some section of the body. Usually, the chest will be lighter or even seem to fade to a white.

Smoke is a fascinating feature. The cat’s outer fur is a solid color. But when you move the fur aside, you may notice that hair closer to the skin (the undercoat) appears lighter. So, from a distance, the cat is a solid color, but its “roots”, so to speak, are lighter.

As it implies, solids are a single color, usually, blacks, browns, creams, and blue. In many cases, casual observers may mistake smokes for solids. The Maine Coon’s longer hair does an excellent job of hiding the inner coat’s other color.

In the case of a solid, the tail and paws will also present the single color of the body.

The tabby is probably the most common pattern to be found in Maine Coons. Tabbies have stripes or patches in their coats or undercoats. The markings can be any of the common tabby-related colors.

There are three types of tabbies that are generally recognized: the classic, mackerel, and patched. Sometimes, you may encounter a tabby that seems peppered in the pattern. This is called a ticked pattern, but it is not recognized as an official pattern.

In many ways, the “TWW” is the same as the tabby, with its patterns and stripes. The only difference is that they tend to have white paws and chests.

“Torties” are generally dark or black with heavy patches of red and cream. They are renowned for their remarkable patterns and are rather attractive with seemingly random streaks of color.

The Most Common Maine Coon Colors

The Cat Fanciers’ Association has recognized an incredible 80 official colors for Maine Coons. Here are some of the Maine designations:

In some cats, we call this color combination a “tuxedo”. The cat is principally black, with a white section extending from the nose and to the chest. The paws may also be white.

“Blue” in cats usually refers to a blue-gray sheen. You can spot shades of blue and silver in these wonderful cats. That said, they are normally of a solid pattern, although a white chest is not uncommon.

Similar to the blue, except the gray tends to fade the shine of the silver a bit. The ears are also more commonly gray or black.

Brown is one of the most common colors for Maine Coons. Easily found with patterns or without, they are nonetheless as beautiful as the rest of their species.

Creams may appear white at a very quick first glance. But they are slightly shaded in a light creamish color. They can also be solid or patterned. Solid cream cats can also be called “full cream” cats. Now you know that’s not a reference to their dietary habits.

⇒ What Smells do Cats Hate? Why do Cats Pant?, How Long do Cats Sleep?, What do Sleeping Cat Positions Mean? When is a Cat an Adult?, Why Do Cats Have Tails?, Do Cats Dream? Are German Shepherds Good with Cats? , Corgis and Cats: What You Need to Know, Can Cats Get Depressed?, Why do Cats Rub Their Faces on Things? Can Golden Retrievers and Cats Get Along? and Rottweilers and Cats: 11 Things You Need to Know

The most famous cream Maine Coon is the Cream Cameo Tabby. This Maine Coon has shades of silver and blue along with the cream which is rather stunning.

Some say the red Maine Coons are the most strikingly beautiful. Their orange (ginger, if you prefer) hue gives them a look that stands out, especially with their longish hair. Red or orange is the most famous color for Maine Coon cats.

Bright golden eyes and pink noses are added for maximum effect. And a side note: Due to a genetic anomaly, about 90% of red Maine Coons are male.

This is a slightly less common variation. It has a shiny gray hue, and is often a mix of two colors, making it more akin to a smoky.

An extraordinary specimen if you can find one. A solid white Maine Coon will be the talk of the dinner table. It may display slightly pink tufts at the end of its ears. Interestingly, the white color cannot be passed on easily, genetically speaking.

White isn’t technically a color – in fact, only 5% of all cats are “white”. The white element is a masking gene. In a parent cat, the gene may mask its true color. So, a white Maine Coon kitten will only be born if at least one of the parents is white and if the masking gene carries over to the offspring intact.

Another sad fact is that a relatively high percentage of white Maine Coons are deaf. Despite this, a true solid white Maine Coon is highly sought after and will cost a fair amount from a breeder.

There are some variations of Maine Coon coloring that are harder to find. In some ways, this makes these more astounding.

As mentioned, white Maine Coons aren’t very easy to come by, and not easy to breed, if at all. True Orange Maine Coons are quite rare, as opposed to Oranges with patterns or color combinations. You’re more likely to find orange smokies or tabbies.

Some breeders may offer hybridized coloring. These are all considered acceptable by breeders’ associations. Red Smoke, Cream Cameo, and Calico are all Maine Coon color variations that can now be found.

There are some patterns that are not recognized, however. One example is the ticked pattern I mentioned before, which can be seen as a peppered effect on a tabby.

As you can see, the options when it comes to Maine Coon colors are almost limitless. With so many variations of patterns and colors, there’s definitely a kitty out there that will suit your visual tastes. And the hyper-friendly, chatty nature of the breed will endear to everyone in the home instantly.

Maine Coons – and cats in general – are such amazing creatures. It’s hard not to fall a little bit in love with every single one you see.

Please Note: This Maine Coon Colors post contains affiliate links. That means if you click through on most of the links and end up making a purchase I will receive a small commission. This will not affect the price that you pay. I wanted to make sure that you were aware of this.

Are German Shepherds Good with Cats? What You Need to Know
← Previous
17 Cat Breeds That Don't Shed or Shed Less
Next →
Click here to cancel reply. 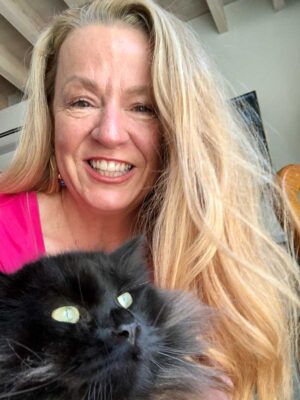 Hi! I’m Amanda, an Australian who has been calling London home for over 15 years. Join my furry Siberian friend Alexei and I as we seek out all things feline, stylish and practical to help us live our best 9 lives!