Can Cats Swim? All You Need to Know 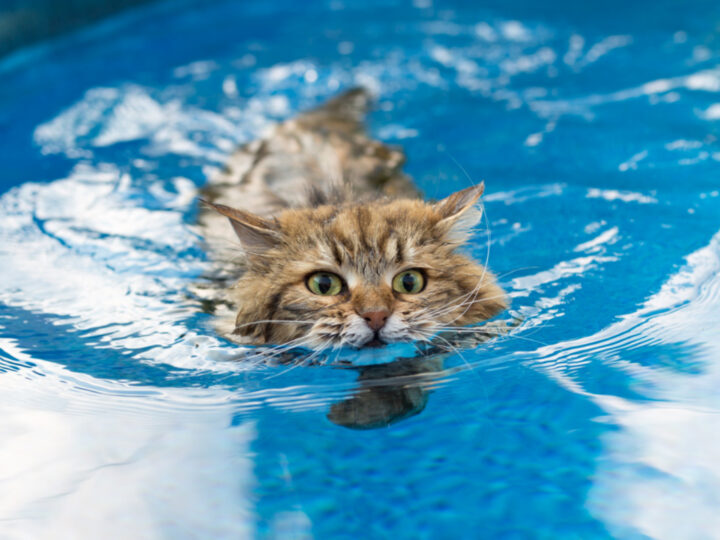 The thing about cats is that they never fail to surprise you. There’s probably a lot that cats can do that we are unaware of… like driving, or playing golf. But let’s start with something simple: Can cats swim?

The short answer is yes. When pressed to do so, cats will more than likely float and swim to safety.

If we were being completely honest, the sight of a wet cat is sad and hilarious at the same time. Partly, it’s because you don’t associate cats with water, swimming, or jet skiing, for that matter.

So that begs the question: Why do cats seem to avoid water like the plague? What makes cats the most unlikely land mammal to be seen in water? Rest assured, it’s not because they can’t swim. So, let’s take a closer look at why cats seem to avoid paddling like a golden retriever on a hot day.

Can Cats Swim? The Biological Explanation

In simple terms, domestic cats are not the most efficient swimmers. Their paws are relatively small, their coats absorb water, and while their bodies are flexible and explosive, they aren’t really built for power.

Looking at cat history offers some clues. For the most part, we trace domestic cats back to Arabia and Egypt, lands that are mostly dry. There are exceptions, of course, as we’ll discover below with breeds like the Maine Coone.

But in general, cats don’t really associate heavily with water-based history. They even manage to keep themselves remarkably clean, without the use of hot tubs and bathing pools.

But Big Cats Can Swim Quite Well

Non-domesticated big cats have a relatively easy time in the water, though they may not prefer to be in it anyway. In the wild, cats need to be “flexible” on what they’ll put up with if they want to eat.

Of the big cats, tigers are probably the best swimmers. They (and other big cats) have large paws that can propel them through the water more easily.

But Cats Hate Water (Don’t They?)

Well… maybe. What we do know is that cats may simply dislike the inconvenience of water. After all, many great cat observers have noted that cats hate inconvenience. But here are a couple of reasons that might inform why cats seem to avoid getting in the deep end.

If a cat isn’t used to being in the water, and it suddenly falls into a pool, for example, it may be overwhelmed by panic. This isn’t a reaction exclusive to cats. Humans sometimes are overcome with shock, too, especially if they feel they’re in distress.

This is why it’s never a good idea to toss a cat into the water. Besides being outrageously cruel, it may actually result in serious injury or death.

Cold Isn’t Nice For a Cat

Generally, cats are warmer than humans, and they don’t like being excessively cold. Under normal circumstances, they can simply curl up and preserve body heat. But drenched in icy cold water, it’s not that easy.

Most cat coats won’t repel water, so it gets right to the skin, which makes a cat deeply unhappy.

Cats May Be Triggered by a Past Experience

Contributing to the panic, a past experience around water may be very traumatic for a cat to contemplate. For example, if they were involuntarily bathed as kittens, the idea of being submerged in water may not be your cat’s notion of a good time.

Kitty may also associate being wet with being trapped in a drain or caught in a rainstorm – anything, really, that reminds her of a bad time. Cats’ memories are strong in these cases, after all.

Cats are extremely sensitive to odors, and there are lots of things with smells that cats dislike. We might think that even ordinary tap water is perfectly odorless, but cats have the ability to really smell the chemicals and additives in food and water. That’s why they sometimes prefer not to get too involved with baths.

The same can be said for pools and murky puddles of water outdoors. Some scientists say that cats can smell 15 times better than humans. If they suddenly don’t smell like themselves to themselves, it would just not be acceptable.

Wetness is Uncomfortable for a Cat

Most cat breeds do not possess coats that do well when they’re wet. Instead, it becomes cloggy and weighed down, meaning a cat cannot move as easily as it likes. And as we all know, a cat is not happy if it is restricted from movement in any way.

Have you ever tried swimming in a heavy, waterlogged coat? It’s not pleasant. For the same reason, a cat is not going to particularly enjoy being dragged to the bottom of a body of water while struggling to stay afloat.

A cat’s natural instinct is to react to its environment very precisely. Either they are stalking prey, or they are wary of being stalked themselves. When they feel they cannot move in the most efficient way, they tend to be very unhappy.

Should I Be Concerned for My Cat?

It’s true that cats are curious to a fault. But it’s not necessarily a reason for panic if you own a pool and a cat. Cats generally do a good job of staying away from things they don’t like.

Remember, also, that just because it doesn’t like to swim, doesn’t mean it can’t in a pinch. With that said, there are a few things you can do to put your own mind slightly more at ease when it comes to your cat’s safety.   Here are five tips for cat owners when it comes to cats and water:

There are freaks in every crowd, and that’s not a bad thing. In the case of cats generally hating water, there are a few breeds that buck the trend and seem to actually love the idea of going for a swim. Or, at the very least, don’t mind it so much.

For some reason, Abyssinians are fairly comfortable exploring bodies of water. While some associate them with the dry land origins stated above, others suggest that an Indian Ocean background may contribute to the Abys’ love of water.

Bengal tigers are legendary. But what about the domestic version? As a wild hybrid, people attribute the Bengal’s genetics as a probable reason for its relative comfort around water.

As mentioned above, the Maine Coon’s love of water may actually be due to its background. They are the “dogs of the cat world”, according to some. They are large and have thick coats that are really good against cold and wetness.

Their relationship with water is fascinating. For example, they actually like to scoop water with their paws when drinking. What kind of cat does that? They also love to step in the shower with their owners. Find a puddle outdoors, and chances are your Maine Coon will get in on that action.

The legend of this cat is such that it is casually called “the swimming cat”. The story goes that they developed an ability to swim really well when they learned that swimming out to fishing boats would be rewarded with a good meal. Necessity, in this case, is the mother of aquatic reinvention.

The Last Word on Cats and Swimming

Chances are you won’t see your cat swimming voluntarily. But it’s good to know that it will more than likely be okay if it does get itself into a situation. It won’t be happy, though.

If you’re still nervous about having your cat around a swimming pool, use a few of the tips listed above. But remember, animals have a wonderful self-preservation instinct, and we know that cats can take care of themselves.

This can cats swim post contains affiliate links. That means if you click through and make a purchase I will most likely receive a small commission. This won’t affect the price you pay. Just wanted to make sure you knew.