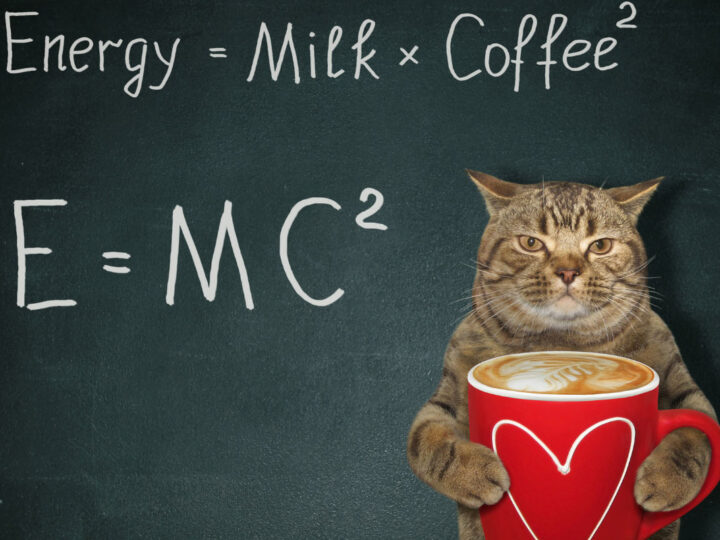 By nature, cats are explorers. Sure, they spend more than half of their day sleeping, eating, and grooming, but the rest of the day is left to adventure. That can be digging in pot plants and discovering treasures beneath the soil or climbing up trees and figuring out how gravity works.

Their lust for life and sense of discovery means that a scientist’s name for your explorer couldn’t be more appropriate. On top of that, domestic cats have been around since ​​4400 B.C, witnessing all of our weird and wonderful scientific discoveries.

To inspire your journey through the elements of science, you’ll find this guide covering all of the most interesting sciency names. From Einstein to Pavlov, use these world-renowned thinkers to name your inquisitive kitty.

Sciency, geeky and nerdy names don’t just have to be about your cat though. Perhaps you’ve got a wild fascination with astrology, physics, geology, or molecular biology? All the better to pay ode to a scientist’s best discovery.

The best scientist names for cats have been based on the most influential scientists. All of these minds are creative and brilliant and totally deserve to inspire the name for your furry feline.

Ivan Pavlov is best known for his psychological findings, and he arrived at his discovery with the help of a couple of furry friends. While studying dogs, he discovered that animals naturally salivated when they were around food. He soon noticed that they began salivating as soon as they saw his white lab coat, as it meant it was food time.

Thanks to his lab assistants, he coined the term classical behavior. His work inspired hundreds of other psychologists in the department of physiology and natural sciences. What better way to commemorate his work and the contributions of his trusty pet assistants than by naming your kitty after him.

Sagan is a name that appeals to all space nerds and astronomy lovers. Carl Sagan played a vital role in the American Space Program, so much so that he became a crucial advisor for NASA. Without him, the first man landing on the moon might not have been possible.

His incredible brain helped solve the mystery of the high temperature on Venus, why Titan has a reddish tint, and the seasonal patterns on Mars.

The name Sagon inspires other space-related names for your feline. Mars, Pluto, Luna, Star, and Comet to name a few.

Isaac Newton is a physicist and mathematician known for his astounding work that played a major role in the scientific revolution of the 16th and 17th centuries. We can thank him for the development of the laws of physics and motion.

Recognized as one of the greatest minds, it’ll be an honor for your cat to receive this geeky name. Given that he was knighted as Sir Isaac Newton, the name also carries an element of royalty for particularly regal cats.

A daughter of a poet, Ada Lovelace was not only known for her brilliant writing but also for her title as the first computer programmer in the mid-1800s. All her work happened in a time when women weren’t given enough credit, so this is a powerful name for girl cats.

Charles Darwin was a British naturalist famed for his theory of natural selection. Darwin spent much of his time in nature discovering the life of rocks, plants, animals, and fossils. His passion for exploring couldn’t be more suited for an adventurous cat’s personality.

Darwin is the perfect name for kitties who love to roam around the neighborhood meeting new animals and trying to get their claws on the sought-after finch.

In 1911, Marie Curie received the Nobel Prize for her work in chemistry and investigating radioactivity’s therapeutic potential. On top of that, she spent much of her life working with radiation, which eventually led to her early death.

Without her, we wouldn’t have discovered the elements Polonium and Radium. Commemorate all the influential scientific discoveries she provided us with by naming your intelligent female feline Marie.

Albert Einstein is the most well-known scientist, famous for his theory of relativity which has helped us understand space, time, gravity, and the universe.

There’s no denying that Einstein had a weird and wacky personality, with hair to match. That’s why it is the perfect name for fluffy white cats or kitties on the scruffy side. If your cat is rather scruffy looking, I find that this grooming brush works wonders.

Nikola Tesla was a brilliant inventor, engineer and physicist. The electrical systems that we use today across the world are all based on his Tesla coil and alternating-current electricity.

While his discoveries most likely go way beyond our understanding, the name Tesla holds a certain level of respect. Perfect for curious kitties getting lost in their own world or those who constantly look like they’re deep in thought.

The Greek philosopher Pythagoras spent much of his life living on the coast of modern Turkey and conjuring up all kinds of wonderful views about the world. On top of that, he also made important developments in mathematics, astronomy, and the theory of music.

Because of the diversity of his work, the name Pythagoras appeals to all of you cat parents who are obsessed with the stars, maths, music, or philosophy.

Rosalind Franklin was a critical influencer in her discovery of the double helix structure of DNA. On top of getting lost in the world of science, she spent much of her time hiking and traveling outdoors.

Therefore, the name Rosalin or Franklin works superbly for playful and courageous kitties who spend their days wandering in the garden or venturing outside the house. And if you travel with your cat, a collapsible litter box is a must.

Jane Goodall completely immersed herself in the world of chimpanzees and because of her actions, we now know more about their gentle giants than we ever did. She lives to explore their complex lifestyles, their emotions, and their lifelong bonds.

Her work has redefined our relationship with animals, so it’s only appropriate to name your gorgeous girl cat, who loves getting lost in nature, after Jane.

Stephen Hawking‘s radical new work on black holes has provided us with one of our deepest understandings of the universe.

As one of the most famous geniuses of our generation, you’ll have a legendary name for your kitty. Plus, he’s featured in shows such as The Simpsons and Star Trek, which makes it appealing to fans of pop culture.

Frank Drake was the founder of SETI, a collection of programs in search of extraterrestrial intelligence. While we’re not exactly sure what aliens look like, he derived a theory that calculated the number of extraterrestrial civilizations there may be. If you’re fascinated by the world of aliens, Frank couldn’t be a better name for your purring feline.

There’s an endless list of brainy thinkers and scientists to name your cat after. Here’s a round-up of ones that’ll get the inspiration flowing. As well as being quirky names, they’re also a great conversation starter to all those who meet your kitty.

This scientist cat names post contains affiliate links. That means if you click through and make a purchase I will most likely receive a small commission. This won’t affect the price you pay. Just wanted to make sure you knew.

i had a cats called Schrodinger, Curie and Becquerel........