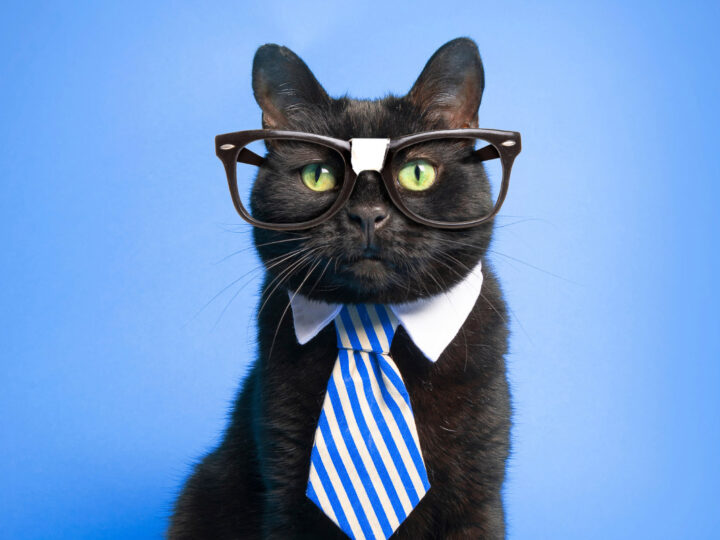 Cats are generally known for being quite savvy, unlike their arch enemies dogs. But how smart are cats? And can they learn to do tricks like dogs? Or do they just choose not to? It is always hard to tell with our enigmatic furry friends. But some cat breeds are definitely believed to have bigger brains than others. Here are 13 that fit that bill.

Your Abyssinian cat may well become your best friend. This high energy cats are always on and ready for fun. What they love most is being close to their owner so they will tend to be in whichever room that you are in.

This breed has a relatively small face which means its large almond shaped eyes stand out even more.

This friendly cat breed is also known for its intelligence and its love of a good climb so be sure to give it a garden or a cat tower for playing. But most of all the Abyssinian loves its human family.

This sociable cat likes company so if you have a busy lifestyle it might be an idea to get another cat or pet to keep it company when you’re not there.

The popular Siamese cat breed will shed minimally if you brush your kitty regularly. Siamese cats are one of the most adored and famous cat breeds. They are intelligent, talkative, and lovely-natured felines, making ideal family pets.

These cats have unique short coats, with a light-colored body and silky smooth fur. Their face, paws, and tails are darker than the rest of their bodies. While they are great indoor cats, they seek companionship from their owners, including sitting on laps and snuggling in bed.

Siamese cats are often labeled as “dog-like” because they enjoy following their humans around and enjoy playtime, like fetch, so stock up on active cat toys. Although they are loving cats, this breed should not be left alone at home for extended periods.

Scottish Fold cats, named for their unusual folded ears and striking, yellowish-orange eye colors, these kitties just love to be around people. These easy-going cats have a great personality and get along with anyone.

Whilst they may be best known for those funny folded ears this breed is also characterised by beautiful big round eyes. Their eyes come in shades of gold, blue or grey and green. Add these to those fluffy ears and you have one cute cat breed!

As active mousers, Scottish fold cats are playful, sensitive, and expressive. These joyful felines have a habit of posing in odd positions – sitting upright as if they were a meerkat, lying flat on the floor, or on their backs with their paws in the air.

They are moderately active and enjoy toys that test their agility and challenge their intelligence, like puzzle toys. Scottish fold cats crave attention and make great companions, so expect to play with them when you get home from work or school.

Despite a seemingly high maintenance fluffy exterior, Persians are a quite independent breed of cat and happy doing their own thing.

Blue Persians are grey cats. Persian cats are affectionate, docile, and gentle kitties. This breed has a quiet demeanor; they plop down on any soft surface and simply pose for your appreciation – little super models.

These elegant cats are not very active, which makes them the perfect indoor pet.

Persians have a relatively small face so their big round eyes are particularly prominent. Most Persians have gorgeous blue eyes but there can be exceptions – or some who have a different colour in each eye. Their eyes can be particularly striking against a blue or grey coat.

Although affectionate, Persian cats are discriminative and reserve their attention for family and a few trusted guests.

This beautiful flat flaced cat breed does get along with children and other household pets; however, they aren’t fans of loud environments but rather serene homes where little changes.

When the Cornish Rex breed does have fur it tends to be curly and sit close to their skin and this means that this breed sheds less than others. Some Cornish Rex cats have no fur at all.

This cat breed is often compared to greyhound dogs due to their sleek appearance and they like a long, lolling run. This is a very adventurous breed that loves to explore and will keep its playful demeanor long after its kitten days are finished.

Turkish Angora cats are known for their long, silky coats which often become the longest around the cat’s neck. They are an adorable combination of large ears, almond-shaped eyes, and a small to medium-sized head.

Originally from Turkey (you may have guessed this), the earliest records of the Turkish Angora cat are from the 16th century. However, the breed began to disappear in the early 19th century.

The Turkish Angora was bred at the Ankara Zoo to preserve its pedigree and breed was officially established in North America in the 1970s.

These friendly and gentle cats also have a more boisterous side and love run, jump and explore. He loves to play and will do almost anything to get your attention.

This cat breed will maintain the playfulness they exhibit as kittens throughout their lives. They will enjoy curling up next to you and on you on both the couch and your bed.

The Japanese bobtail breed has a single coat that doesn’t tend to shed much hair. This breed also loves grooming itself which minimises the amout of work required by owners.

This sweet and loving breed of course originates from Japan. Apparently in the 1600s Japanese street cats were bobtails. The breed is considered to be lucky and its owners should prosper.

Statues of tri-colour Japanese Bobtail cats are quite common in Japan (these are supposed to be the luckiest Japanese Bobtails of all!). So when you see the familiar statue with the kitty raising its paw up and down you now know that you are looking at a Japanese bobtail cat.

The breed is named bobtail due to its short and stubby tail. They were also adored by the Japanese Imperial family and still have a regal air to them. This means that your home – and the items wihin it – are part of their Kingdom.

These handsome kitties are very outgoing and live a long life – between 15 and 20 years on average. They are very loving and like to follow their owners everywhere – even into the bathroom.

Korats have stunning blue or grey coats that seem to shimmer and become almost silver at the ends. Their beautiful coats are then complimented by their lovely green eyes.

Their coats are very fine so they don’t require much grooming. Once a week should suffice for a brush and add in a chamois cloth rub to buff up their sheen. Korat cats tend to very much enjoy being groomed.

The Korat cat breed has been around for over 600 years and originated in the Korat region of Thailand. In 1959 an American ambassador visiting Thailand was given two korat cats and this is when the breed made its way to the United States.

As the breed is quite rare this is an expensive cat breed.

This is a stylish and sleek breed with the same deep blue eyes of the Siamese – add in their gorgeous silky long coat and this is one good looking cat breed. Their sleek silky coats also highlight their proportionately large ears.

Balinese cats are known to be intelligent, friendly and playful. They can also be quite vocal and rather demanding – part of that intelligence, these kitties know what they want!

This is also a breed that likes attention and shouldn’t be left alone for long periods. So if you are after an independent and introverted type of kitty this isn’t the breed for you.

This short-haired cat breed sheds less frequently than other cat breeds and requires less grooming maintenance from their owners.

Bengal cats are one of the newer cat breeds, a combination of the asian leopard cat and a US domestic cat. These affectionate cats are energetic and playful.

A distinctive feature of their thick and lustrous coat is the pearl or gold dusting or glitter effect. This is one of the many features of the lovely Bengal cat that contributes to its extreme cuteness.

The breed is also known for its black-rimmed and almond-shaped eyes and distinctive whisker pads. Add to this their thick tail that often finishes in a black tapered tip and you have one seriously cute cat.

One of the most expensive cat breeds, the Savannah is a fabulous mix of a genuinely wild cat (cerval) and a domestic cat. This gives them very stylish cheetah markings on their coats.

Savannahs are so costly due to their breeding. It takes luck – and often a number of years – to mate a serval and a domesticated cat.

They bond with only a few people and are known to be very loyal. They’re very inquisitive and have an impressive ability to jump – even onto fridges and high walls. They have quite a strong hunting instinct, so if you keep birds or fish, your Savannah cat will likely eye them daily.

Because of this hunting instinct, it’s important to look at your country and city’s ownership laws before you decide to invest in this feline. Some areas have restrictive laws because these large cats can threaten native species.

The Burmese breed has a short, fine coat that loses less hair than other cat breeds.

Their coats are short and silky and are low-maintenance, requiring a weekly brush or combing to remove dead hair. And that short silky hair sets off their gorgeous large round and gleaming green eyes.

The Burmese are friendly, personable, and kind kitties. With Siamese ancestors, these felines are playful and affectionate, but not clingy. Burmese cats often characterized as a “rock wrapped in silk” due to being much heavier than what they appear to be.

Younger Burmese cats are curious and active, and as they get older, they become placid and prefer to watch rather than getting involved in activities. You’ll often see them sleeping on a windowsill or at the corner of a sofa, snagging the sunlight.

Burmese cats are excellent jumpers and climbers and should have cat perches or something to climb up on.

In the 1950s a group of cat fanciers decided to breed Siamese and domestic black cats and the end result was the Havana Brown. As you may have guessed, this breed has wonderful chocolate brown coats and dazzling green eyes. They are loyal and affectionate pets and great with families.

This smartest cat breeds post contains affiliate links. That means if you click through and make a purchase I will most likely receive a small commission. This won’t affect the price you pay. Just wanted to make sure you knew.

Why do Cats Stick Their Tongues Out? 15 Reasons
← Previous
16 Largest Breeds of Cat
Next →
Click here to cancel reply.