Why Does My Cat’s Tail Shake? 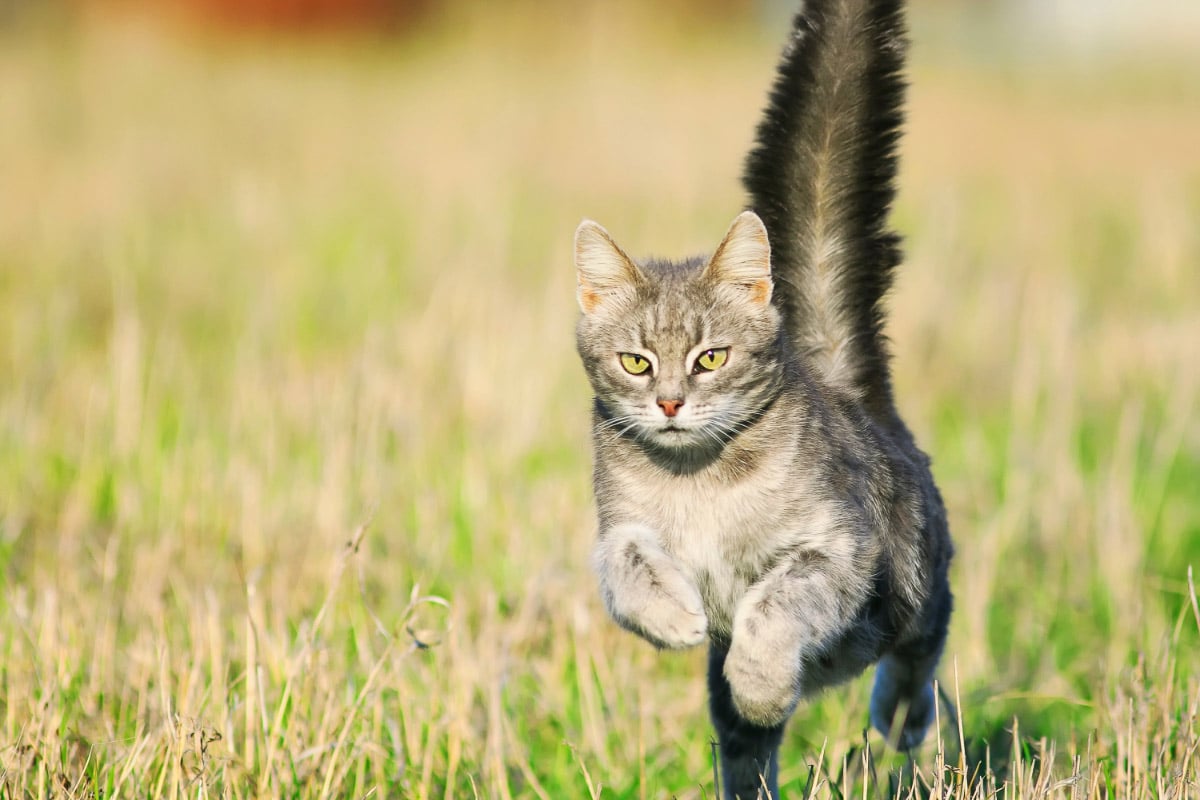 Have you sometimes noticed that your cat, as cute as they are, happens to be standing by the doorway with their tail shaking vigorously? Did it alarm you? Did you wonder what was happening? Why does my cat’s tail shake?

This particular sight may be perplexing if you’re an inexperienced cat owner. Usually, the cat doesn’t seem to be in any other sort of distress. So what is that shaky tail all about? Sometimes, the cat may even seem particularly relaxed. Although, there are times when it may seem a little anxious, too.

First of all, don’t worry. Some of the behavior is learned, some of it is instinctual, and it’s a little bit of both in most cases. In this article, we’ll look at what to expect, and what you may need to look out for when it comes to your cat’s tail shaking.

As is often the case with cats, the explanations for such behavior can have many possibilities. Let’s take a quick look into the causes of that shaky tail and why this is an action cats may be display.

Cats, it must be said, communicate through their body language, for the most part. Yes, they sometimes meow at you, but watching and understanding their body movements and gestures is a far more accurate insight into their mood and intention.

Cats chase their tails, for example, especially when they’re young. It’s cute but it also tells us a lot about their personality.

In this case, a shaking tail can mean one of a few things. Most are no cause for alarm. In many cases, the tail shake is entirely normal. But it is worth knowing the reasons, just in case you notice something out of the ordinary.

About a Cat’s Tail

Cat’s tails can tell us a lot about what they’re feeling. For example, a low tail might indicate anxiety. A tail that is suddently upright and bushy could mean the same thing. A tail high in the air usually indicates attentiveness and alertness.

Our concern is when the tail is shaking. Be careful not to confuse this with wagging or twitching, which might indicate annoyance or impatience. The shaking is more rapid than twitching. It could affect the whole tail or just the tip.

What 2 Different Types of Shaking May Mean

There are two types of shaking or quivering tails to look out for/ you may come across..

When your cat’s tail is pointed straight up and quivering, it is most likely just excited and happy to see you. You will most likely see this at the end of a long day away or even early in the morning when you wake up.

This is a moment to treasure, as it’s pretty reassuring to you to know that your kitty has missed you. More than that, it’s proof that your cat has affection for you, even though it may deny this through other actions later.

The quivering may also be accompanied by the tail folding back over the cat’s back, “sleepy eyes” made at you, and purring. Common knowledge suggests that this is an instinctive behavior to expose their scent glands to us as a gesture of trust.

The very tip of the tail will sometimes twitch when your cat has seen something that it is interested in. It may mean that they have spotted a possible prey or item for play. You may notice that its eyes are fixed on something specific. This is usually associated with tension or excitement.

The reasons for your cat quivering its tail may be reasonably straightforward, but there are several emotions and reactions associated with the phenomenon. Let’s take a look into what the cat may be feeling beyond the tail, so to speak.

We know that the tip of the tail shaking means high concentration, as they’re looking at something in anticipation of catching or playing with it. This involves a certain amount of anxiety.

That same anxiety can also be triggered by frustration. For example, if your cat sees a bird through a window, their tail may be twitching with tension because it does not know how to reach it.

Another possibility is that it senses something is amiss. It may have heard a sound, for example, that it is unsure of. If the shaking tail is a common and daily occurrence, you may want to take a look at any triggering factors.

Constant stress and anxiety are bad for your kitty’s general health. Talk to a vet about the possibility of a calming pheromone diffuser or other options.

If any pet has a short and unpredictable temper, it’s a cat. On occasion, your cat may signal annoyance or anger with a tail movement that can be mistaken for shaking. Twitching and shaking are pretty easily mistaken for one another, so it’s possible that your cat may actually be angry.

If you are happily playing or petting your cat and suddenly seeing its tail vibrating, make sure it’s not because it wants you to stop. Cats can easily be irritated by an action they were perfectly fine with just a moment earlier.

A vibrating tail is often a precursor to more intense tail swishing. Be sure to look out for the switch. The best idea is to walk away at that point.

As mentioned, a shaking tail may be associated with happiness or positive excitement. You will often see this at feeding time, anticipating its favorite cat food or wet food on the way.

Cats are also fully capable of reacting excitedly when you get home. They recognize you! Some cats have even been known to respond to their favorite cat toys in this way.

The Question of Spraying Cats

In some cases, cats shake their tails as part of the process of spraying. Cats spray to mark territory, the shaking of the tail is usually seen as helping to activate the scent gland and spread the urine used.

In simple terms, this is a normal and natural behavior for cats, as they are predators and use scent or urine marking for territory in the wild. Even domestic cats carry forth this natural instinct. They will sometimes stand up against a vertical surface like a wall, door, or sofa and “spray” it with scented urine to mark it.

In doing so, it will raise its tail, which will appear to quiver or vibrate. When other cats smell this scent, they are told to go away. This particular hunting area (or mating area) belongs to someone else.

Domestic cats have additional factors to consider, such as “fake spray.”

Sometimes, a domestic cat doesn’t actually spray, and the tail simply shakes as if “pretending’ to spray. It is not quite clear why this happens.

Fake spraying could indicate that the cat is feeling stressed or uncomfortable within its own territory. This might be triggered by an unwanted intrusion (usually by another pet or neighboring animal). If you suspect your cat is feeling threatened or insecure, try to address such environmental factors.

For example, some cats aren’t appropriately taught how to spray by a parent figure. In this case, it may be an instinct that forces the behavior without a proper understanding of how to do it properly. This is called phantom spraying.

Phantom spraying may, however, serve its own purpose. For example, a cat seeing another cat appear to spray might be enough to discourage conflict. Kittens may also observe an older cat perform this act and learn from it. For example, young kittens whose mother cats do it will likely perform the same behavior – even fake spray – as they grow.

Oddly, cats may spray on other cats when they are fighting. This is a dominance behavior and will be accompanied by tail quivering, although this will also bear elements of anger and anxiety.

A cat will rarely spray on another passive cat or person. If it does happen, it’s most likely because you are a standing vertical surface that happens to be there.

Many house cats have no need to mark territory, as most feel secure in their own homes. If your cat does not spray, this may not cause your cat to quiver its tail. Neutered cats, especially, are less likely to exhibit predatory behavior.

Bear in mind that other stress factors may trigger spraying behavior. For example, if you move house, the brand new environment may need “marking,” as your cat can no longer smell itself on anything.

Interesting Facts About Your Cat’s Tail

Since we’re talking about a cat’s tail, let’s consider a few interesting facts about your cat’s anatomy.

Final Thoughts on Why Does my Cats Tail Shake

As you now know, there are plenty of reasons why your cat’s tail might shake or quiver. However, it’s important to know the difference between your cat’s different tail motions. Is it quivering excitedly, or is it twitching?

If it’s standing next to a vertical surface, might it be spraying? Or is it simply doing this every time you feed it? Keep a keen eye on when the tail is moving — and how. Hopefully, you’ll realize there’s nothing to worry about.

If, for some reason, you do feel that the behavior is concerning, consult a vet for advice on how to address the situation. Most of all, enjoy your cat’s company!

This why does my cats tail shake post contains affiliate links. That means if you click through and make a purchase I will most likely receive a small commission. This won’t affect the price you pay. Just wanted to make sure you knew.