Genetta Cat: 10 Things to Know About the Munchkin Bengal Mix 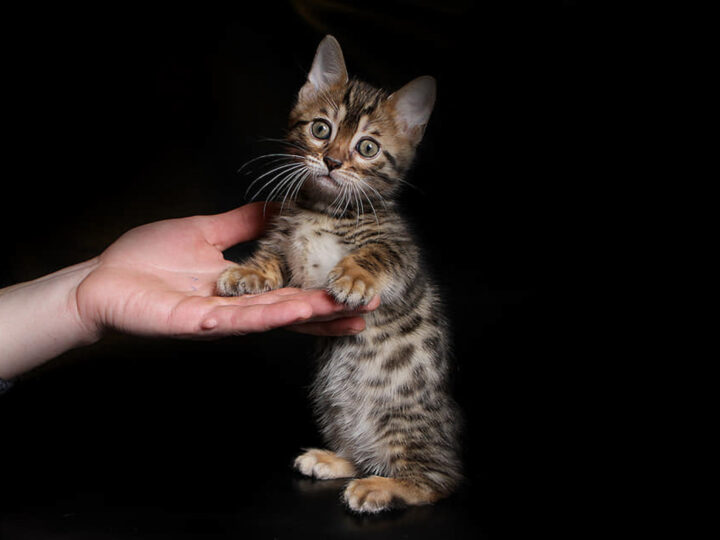 The Genetta cat is a newly-developed breed of cat, from the Pawstruck Cattery. The breeders of the Genetta explain that they understand that there is a demand for genets as pets. As such, they found that combining the traits of a Bengal and a Munchkin breed might create a cat that closely resembles a genet.

Much like a Minskin cat, the Genetta is an engineered breed. Both parent breeds have specific traits that contribute to its looks, including short legs and exotic patterns and coloring. The Bengal isn’t a small cat, but has less hair. The Munchkin carries a gene that produces short legs in a small cat.

And no, there are no genet genes involved in the creation of a Genetta cat. Let’s take a closer look at this unusual breed and what you need to know about them.

10 Things to Know about Genetta Cats

1. There Are Three Breeds Used to Create the Genetta

The genetta cat is essentially a combination of three main breeds. It takes the most desired traits from these breeds and combines them to create the cutest feline kitten.

The Savannah itself is a hybrid breed – it is a cross between a serval and domestic Siamese cat, and is a medium-sized to large cat. It has an exotic pattern on its coat, with black dots and stripes over a white and tan base coat.

The Bengal is also a hybrid, known for its coat that looks like a wild big cat’s – a leopard’s, in particular. They are the only cat breed that display rosette patterns and markings. Brown, silver and snow colors dominate the generally short coat.

Munchkin cats were officially recognized in the early 90s. They are also referred to as Dwarf cats, due to their short legs – as a result, they are classified as small cats. Other than their oddly short appearance, they are perfectly normal cats, and have surpassed expectations around health and longevity concerns.

This makes the Gentta a hybrid of hybrids, in some ways. The Pawstruck breeders have indicated a possible future inclusion of Oriental Shorthairs and Ocicats as well, although no timeline has been set for this program.

A wild genet is inigenous to Africa, although it has been present in the European wilds for some time. There are 14 different species of genet, and they come in varieties that live in dry regions as well as more forested areas.

They have long, ringed tails, and at a stretch resemble very lean, small cats. Like a cat, they have retractable claws, and are carnivorous. The Large-Spotted genet variety is short-legged.

Typically, Genetta cats are a short-legged cat, with a coat pattern that resembles an Asian leopard. From time to time, a normal-legged cat is born to the breed. This is because it’s entirely dependent on whether the gene carries in a specific cat.

4. The Smaller the Genetta, the Better

A typical Genetta cat will grow to somewhere between five to eight inches in height and around five pounds. If the short legs have not carried through, it will be the same size as a normal house cat at 12 inches or so.

Owners prefer the cat to be as small as possible. So in general, the smaller the cat, the better, they would say.

5. The Genetta Colors and Patterns Are Unusual

At a glance, the colors of the Genetta are intended to look like that of a wild cat. The Asian Leopard pattern is striking, and desired. Most breeders and owners specifically do not desire Genettas that are  more traditionally cat-colored and patterned. So you are unlikely to find tortoise-shells or patched Genettas.

Common colors include orange and brown, with spots or stripes. Sometimes a genetta will inherit the green eyes of the Bengal.

Bear in mind that every cat is different, but there are some general, expected personality traits. Genetta cats are active and intelligent. They are known for a number of positive personality characteristics, including being very trainable.

Genettas love to play with cat toys and will happily engage in playtime with all members of the family. They aren’t lazy, and will be surprisingly active for long periods of time.

Because of their intelligence, they have a need for social activity. Genettas do suffer from separation anxiety. If you are away from home for long periods of time, the cat might start displaying unwanted behavior and stress like excessive grooming and vocalizing. This cat loves its people.

For all intents and purposes, Genetta cats are indeed normal cats. Like Minskin and other Munchkin cats, they are playful and love to galavant, climb, run and pounce. They have little trouble when it comes to climbing all over the furniture, so a good cat tree will come in handy.

When a surface is particularly high, they may not be able to reach it, but they are known to be quite resourceful for getting to where they want,so there’s no difference between them and a normal cat.

8. Genetta Cats Are Technically Not Hypoallergenic

Genettas are low maintenance when it comes to grooming. The coat is smooth and light. But it is not technically hypoallergenic. It does, in fact, shed, though very minimally on the cat-shedder scale. It is – in technical terms – a “low-shedding cat”.

9. Genetta Cats Do Not Suffer From Specific Health Problems

Although there are no ailments specific to Genetta cats, some vulnerabilities are passed down from their parent breeds.

For example, Munchkin Cats seem to be susceptible to lordosis and pectus excavatum, so these may carry through to a Genetta, although not excessively so.

Lordosis is a problem related to the compression of the spine. Pectus excavatum is a deformity in the chest that causes problems with breathing and movement. It’s not specific to dwarf cats, but more common than in full sized cats.

Bengal Cats are known to suffer from hypertrophic cardiomyopathy, a heart defect. This is found in many breeds of cat, but bengals are slightly more likely to have this condition. Bengals also sometimes go blind due to a condition called progressive retinal atrophy.

None of this seems to be an automatic issue with Genettas. Other concerns have also not yet been confirmed. The assumption that the short legs lead to spinal problems is not yet medically quantifiable.

The Genetta lives up to a healthy 15 years – a fair length of cat life – so there are no identifiable chronic issues on that front.

Munchkin and other dwarf cats are considered normal and healthy in general, so a Genetta cat will likely have no specific predispositions, health-wise,either..

10. The Genetta is a Recognized Breed (Mostly)

The International Cat Association recognizes the breed. The Rare and Exotic Feline Registry and the Dwarf Cat Association will also accept a registration of a Genetta cat.

The Cat Fanciers Association currently does not recognize the Munchkin cat or other dwarf cats. This has to do with a dispute around the ethics of breeding dwarf cats.

Final Thoughts on the Genetta Cat

This beautiful engineered cat is a pure delight. It has incredibly unique looks, is cute as a button, and has the social personality to match. It’s still a new breed, and the breeders are in the process of looking further into the ways in which the breed can evolve.

Even so, the Genetta has found a dedicated fanbase, and shows no signs of losing its momentum. Will you consider Genetta cat as a companion?

This Genetta cat post contains affiliate links. That means if you click through and make a purchase I will most likely receive a small commission. This won’t affect the price you pay. Just wanted to make sure you knew.