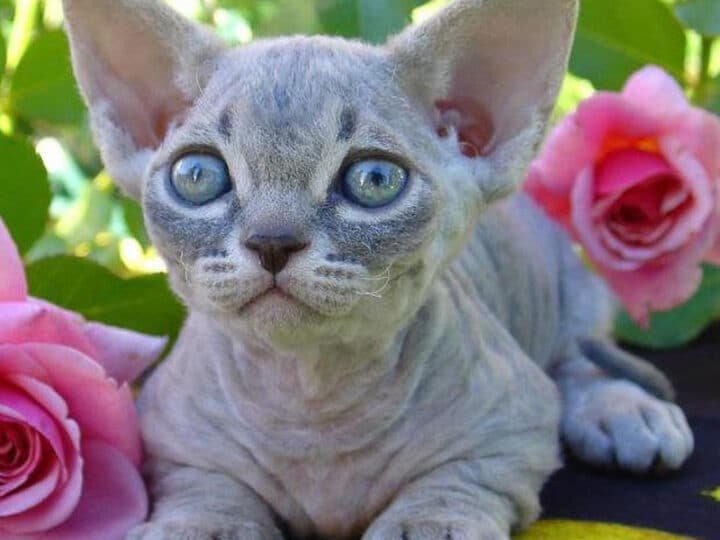 The Minskin is a relatively new breed of cat that has drawn lots of attention in the cat world. It has unique looks and an interesting pedigree (or history, at least) and seems to be finding a home amongst families in search of something unique.

It takes specific characteristics of four breeds of cat – themselves unusual and rare – and blends them into a lovable, adorable, playful cat that loves families, kids, and other pets.

Despite being so young in existence, Minskins do have particular traits and interesting things to note about them. Their uniqueness extends to certain considerations you should bear in mind when thinking about adopting one.

In this article, we’ll take a look at 13 interesting facts worth knowing about Minskin cats. We’ll talk about their short history (excuse the pun), some unique aspects of this breed, and a few aspects of care for one of the most friendly cats around.

13 Things to Know about Minskin Cats

Let’s start with a basic description. The name Minskin comes from the words “miniature” and “skin”. The reasons for these words as descriptors are not hard to fathom!

Minskin cats are small. They only weigh up to four pounds at maximum. As a result, they almost seem to remain as kittens their entire life – at least in appearance.

They have short legs, with the front legs slightly shorter than the hind legs. Because of the shortness of their legs, they appear to look stocky in a sense. The technical term used is cobby-bodied.

The Minskin has large eyes and a round head. It also has unusually large ears. Some say this makes it resemble an alien. It also doesn’t help that the Minskin appears hairless, though it is not. Its belly is sometimes hairless, but most of the rest of its body is not.

It has very short hair, and the softness and smoothness of its hair makes it hard to see it at first. The Minskin’s hair points have thicker and more visible hair, though. Hair points refer to the face, legs and tail.

Minskins come in a variety of colors, from tabby, white with various color points, solids, tortoise shells, and more.

2. The Minskin Was Custom Made

It is said that if there ever was a “designed” cat, it’s the Minskin. The creation of the breed is credited to Paul Sorley of Boston in the USA, who desired a cat that had hair only in certain areas of its body, like ear tips.

He set about creating a short and small cat breed, crossing the Munchkin with the hairless Sphynx cat. He also added elements of the Devon Rex and Burmese breeds. Sorley declared success in 2000. The International Cat Association currently recognizes the cat as a new breed.

3. The Minskin Is a Rare Breed

Not only is the Minskin a relatively rare breed, but its originating species are also quite rare. That makes the Minskin double-rare, we guess?

By 2005, Paul Sorley and others had only 50 recognized Minskins in existence. Although that number has grown since, the Minskin is still considered a rare and exotic cat.

4. There Are Four Parent Breeds

As mentioned, there were four parent breeds involved in creating the Minskin. Here’s some basic info on them:

The Munchkin is known for its short legs, which were caused by a genetic mutation. It is also known as a sausage cat due to its seemingly elongated body.

Munchkins like to sit up on their hind legs for a better view. It’s also worth noting that not all cats born of munchkins will indeed have short legs – it depends on whether a specific gene is carried through.

The Sphynx, despite its name, does not come from Egypt. It is actually a Canadian breed, and like the Minskin has a barely visible, fine layer of downy hair (so it’s not naked). They have uniquely high metabolisms and due to this, a reputation of eating a lot.

This British breed is also relatively small and short-haired, though it does carry a gene that makes its hair curl. They are strangely intuitive and are one of few cat breeds that can be taught tricks like dogs. That includes walking on a leash and playing fetch.

These lovely American cats are affectionately described as “bricks wrapped in silk” because they are routinely heavier than they appear. They are also extremely vocal about letting you know they’re around by making a low rumble sound instead of meowing. Burmese are related to Siamese cats in that they were bred from at least one part Siamese.

5. Minskins Are Not Suited to the Outdoors

Like other hairless or extremely short-haired cats, Minskins are vulnerable to certain dangers when outdoors. The chief amongst these is the sun. Minskins can get sunburnt very easily. On the other hand, they are not very well protected from cold, either.

So unless it’s an absolutely, perfectly warm day and you have a well-shaded area to play, this kitty will have to be very careful when playing outside.

6. There Is Some Controversy Around the Breed’s Recognition

While TICA (The International Cat Association) recognizes the breed as legitimate, the Cat Fanciers Association does not. The issue seems to boil down to an argument over whether the specific breeding of dwarf cats, in general, is ethical.

Needless to say, the cat community is divided on the issue.

7. Minskins Are Active and Easy to Train

You might want to prepare for lots of active engagement if you’re adopting a Minskin. They love to climb, jump and run around and will find a way onto or into most things in your home.

But Minskins are also easy to train, provided you start at an early age. They are very intelligent cats and will make up their own adventures if you don’t provide enough toys like a cat tree for them to focus on.

8. Minskins Are Easy but Important to Take Care Of

You won’t have as many issues with this side of things as shedding isn’t really an issue. But because the cat is easy to take care of in this regard, it doesn’t mean this aspect can be largely ignored. The relatively hairless nature of the cat makes it prone to other ailments like yeast infections.

A weekly bath is commonly recommended for Minskins, much like for hairless or near-hairless cats. This helps to avoid irritations and skin conditions. Use a good vet formula antifungal shampoo. Think of it as extra bonding time with your Minskin.

Minskins love people. They are known for being great with families and even children. They also happen to get along well with other pets.

Their athletic energy will also provide endless hours of fun. Watch them chase cat toys around, play with anything dangling loosely, and try to catch that red pointer light you shine on the floor.

Minskins also seem to love a good lap to curl up in. That’s a good thing, as Minskins tend to be quite warm.

Reports suggest that Minskins require lots of human companionships, as they seem to be the most comfortable with close connections. This is not a cat to leave alone for long periods of time.

Minskins do not like moving homes. They are generally uncomfortable with any instability or change. If you move around a lot, a Minskin may not be the best breed choice for you.

But this same reason makes them great for people with established homes. Senior citizens come to mind, as they tend to live in more sedate surroundings (although a new Minskin might change that). If, as mentioned, you enjoy a good lap cat and a quiet afternoon or evening with a book, a Minskin might be worth considering.

Although the general perception is that dwarf animals and humans live shorter than average lives, this is not always the case. The Minskin lives an average of 12-14 years, which is not particularly short for a cat.

Bear in mind that the breed has only been recognized for about 20 years, so we are still only seeing the first or second generation of Minskins in existence.

The breed is still too young for experts to determine whether Misnkins have breed-specific health issues. As far as current records show, the cat, in general, seems to have good health with no particular problems. Research and monitoring continue in this regard.

With regards to any special care and diet, the Minskin does not require any specific food or supplements. A normal balanced cat food diet will suffice for a healthy kitty.

There are some problems that the Minskin breed can inherit from its parent breeds. We have mentioned that the Minskin was bred from four different cat breeds. Those individual breeds have traits that can be passed down as vulnerabilities or susceptibility.

Munchkin cats have been known to suffer from spinal problems or veterinary lordosis. Although it’s not unique to the breed or size of the cat, it has the potential to be passed down. There are no specifically-focused reports around whether this condition is more prevalent in Minskins than in other cats.

Because the Minskin has so little hair, it has less protection from everyday cuts and bruises. It is also susceptible to yeast infections.

The Sphynx is prone to sunburn and skin cancer, and the fairly hairless nature of the Minskin skin will leave it open to the same dangers.

The Sphynx and Devon Rex cats are both known to develop heart problems. It is not known whether this will carry to the Minskin breed in any notable way.

Minskins are indeed unique, and they will definitely be a talking point of interest whenever encountered. They are even more special for their ability to socialize well with people and families.

It’s difficult to resist their playful attitude, high intelligence, and warm, cuddly demeanor. As a new breed, they have found a surprisingly willing audience, no doubt due to all these characteristics. Now it’s time for you to decide if getting a Minskin is a good idea for you, or should you consider some other dwarf cat?

This Minskin cat post contains affiliate links. That means if you click through and make a purchase I will most likely receive a small commission. This won’t affect the price you pay. Just wanted to make sure you knew.

Why Do Cats Rub Their Faces on Things? 8 Reasons
← Previous
Skookum Cat: 13 Things You Need to Know
Next →
Click here to cancel reply.