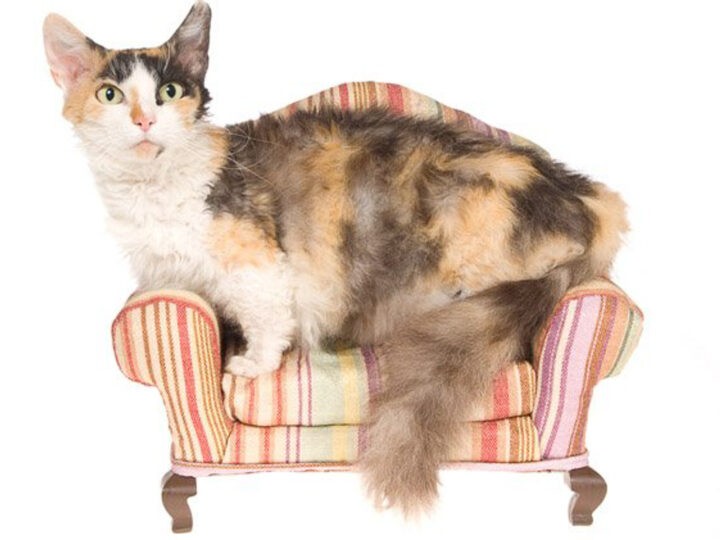 Often referred to as the Shirley Temples of the cat world, these adorable felines have an interestingly recognizable trademark of curly coats, whiskers, and eyebrows. And, these cute traits aren’t their only unique feature. Skookums have shorter front legs than their rear legs, though this doesn’t prevent these cute little critters from zooming around speedily.

Skookum cats are a unique and rare breed of feline. Their story begins in the late 90s, and today they’re recognized as an experimental breed by some registries. The parent breed’s temperaments and characteristics shine through these adorable little furballs.

From their unusual short legs to their curly coats, let’s dive in to know more about this short-legged breed of kitty.

13 Things to Know About Skookum Cats

If you’re looking to get yourself an adorable, curly-whiskered-eyebrowed-haired, short little Skookum, there are some interesting things to know about them. For starters, they aren’t your typical house bread cat; despite their stature, they’re super energetic and just simply full of love and cuddles.

So, without further ado, let’s take a look at what there is to know about these cute little critters.

Skookum cats were developed from a cross between Munchkins and LaPerm cats to create a short-legged kitty with a curly coat. The Skookum breed is around 30 years old now, and while this may seem long, it is relatively short in terms of existence for a cat breed.

Take a look at their parent breeds. Munchkins have been around since the 1940s and the LaPerm cats since the 1980s. The Skookum breed began in the 1990s when Roy Galusha started cross-breeding Munchkins and LaPerms.

While the word “rex” is often used to demonstrate that a cat breed has curly hair, such as the Devon Rex and Cornish Rex, the curly-haired Skookum does not follow suit with its name.

The Skookum name has Native American origins, deriving from jargon used by the Chinook tribe, meaning “mighty,” “brave,” or “powerful.” That’s a pretty big name for such a small kitty to live up to. But funnily enough, these little curly pet balls are, in fact, brave and mighty – in their own kinds of shapes and forms.

Because the Skookum breed is still in its early stages and they’re a relatively new strain of breed, it’s important to take a look at and study the parent breed’s characters. The Skookum cat’s temperament may retain many of the Munchkin’s and LaPerm’s qualities.

The Skookum kitty may inherit traits from both of its parent breeds. After all, they’re known to be lively and playful, intelligent, and curious. If you’re looking for a fur baby that will get along with other pets in the house and, of course, your children, then a little Skookum may fit in perfectly.

Keep in mind, when looking for any cross-bred cat, you could end up with the dominant personality from either parent breed. So, make sure you’re happy with both the Munchkin’s and LaPerm’s temperaments before committing yourself and your family to a Skookum.

As I’ve mentioned, these furry felines are active, playful kitties that are full of spirit. They love climbing and jumping, so investing in a cat tree or shelves for cats would be most appropriate when owning a Skookum.

Along with their adorable personality and silly antics, these kitties love to snuggle and are affectionate in nature.

Moreover, Skookum cats are known for their happy-go-lucky personalities. These confident and calm kitties are athletic and make wonderful family pets, or for anyone searching for an active cat that enjoys a friendly lap snuggle.

Psst…Keep in mind, temperament is inherited, while personality is acquired through socialization and other factors.

Skookum’s characteristics include distinct features that set them apart from their parent cats, the Munchkin and LaPerm.

As a unique cat breed, these kitties have long, plumed tails with rounded tips. They boast large, pointed ears atop their wedged-shaped heads. Moreover, they have medium-to-large, almond-shaped eyes.

Despite these kitties being lightweight furballs, they are considerably muscular. This is because their short front legs and longer back legs have a stocky appearance, and their bodies appear to stay low to the ground. Overall, the body and neck of a Skookum cat may appear broad with a rounded chest and compact feet.

Although these kitties have a unique appearance, Skookums don’t have a particular dietary requirement.

To keep your Skookum’s coat, skin, and weight at optimal levels, you should provide your kitty with a high-quality protein diet with natural ingredients. It’s a good idea to give these pussycats a mix of dry and wet cat foods to provide a diverse array of nutrients.

Canned foods may also provide added moisture and protein to your cat’s diet and are vital to a healthy lifestyle.

Psst…Not sure what to feed your kitty? Take a look at this ‘Ultimate Cat Feeding Guide’ to find the best wet and dry foods for felines.

Skookums have loads of energy; they love to play and bounce around. So, if you own or are about to, you should invest in toys and be prepared to do some active pursuits now and then. Hands-on toys are more likely to stimulate them and get them moving, like a laser point or a puzzle box.

These little furbabies are super smart and won’t give you much trouble when you’re training them to do basic things, such as using the litter box. Furthermore, if you have the patience to work with them, these lovely pussies are bright enough to master more complex skills such as cat walking.

⇒ An entertained cat is a happy cat. Check out my posts on 9 Best Treats for Cats, Ultimate Guide to Gifts for Cats, 6 Best Toys for Cats, 14 Best Cat Chew Toys, Clothing for Cats and Best Costumes for Pet Cats.

A Skookum cat’s curly locks are one of its most unique features. Moreover, these felines even have curled whiskers and eyebrows – how cute!

A Skookum’s coat can feature an array of patterns and colors. These can include tabby, bicolor, color points, and solid colors. And apart from curly coats and colors, their coats can be either short or long. Furthermore, skookums can also come in other colors that are present in the Munchkin or LaPerm lines.

Skookum cats are generally low-maintenance breeds. Though they are easy to care for, one should remember that they still require the basic responsibility that you would give to any other furry friend.

Regular visits to the vets for general check-ups and shots are recommended. Due to these kitties’ small legs, you should take your Skookum for check-ups to ensure that they are not suffering from any back or joint problems either.

It’s also essential to provide your kitty with plenty of exercises (remember they’re part Munchkin and thus, like to be active).

Skookum cats’ curls are considered one of these cats’ main distinguishing characteristics. Their curly, windblown coats go in whichever way it pleases. Though the fur may look intimidating to maintain, it’s fairly easy and requires minimal maintenance.

These kitty’s hairs may require brushing with a cat brush once or twice a week. You’ll want to brush the soft curls gently so that the locks don’t frizz – yep, you heard it, frizz.

You could use some water in a spray bottle and some pet conditioner to spray the curls lightly. Then run your fingers through their curls to give some volume – much like humans would do, right?

If you’d like to brush them more, go ahead. These felines love being petted, cuddled, and adored. Moreover, it’s a great way to bond with your attention-loving Skookum.

Skookum cats are an experimental, new feline breed, so major health problems and life expectancy are unknown for now. For the most part, the breed is relatively healthy.

Like the Lambkin cat, the Skookums are cross-bred from the Munchkin cat, where dwarfism in cats is the result of genetic mutation from the parent breeds. This creates a condition known as pseudoachondroplasia. While it may not cause problems for the feline, it can result in limb deformities or death while still in the womb.

Munchkin cats are also prone to having lordosis and pectus excavatum. On the other hand, LaPerm cats are healthy felines without any genetic disorders. Therefore, Skookums may inherit health problems just like any other breed of Munchkin cats.

⇒ What Smells do Cats Hate? Why do Cats Pant?, How Long do Cats Sleep?, What do Sleeping Cat Positions Mean? When is a Cat an Adult?, Why Do Cats Have Tails?, Do Cats Dream? Are German Shepherds Good with Cats? , Corgis and Cats: What You Need to Know, Can Cats Get Depressed?, Why do Cats Rub Their Faces on Things?, Why Does my Cat Sleep with me and not my husband?, Can Golden Retrievers and Cats Get Along?, Why does my cat fart so much?, and Rottweilers and Cats: 11 Things You Need to Know

There are some notable physical differences between female and male Skookums.

The most apparent distinction is the size of the cat. Females generally weigh in at 3-5 pounds, whereas males, on average, weigh between 5-7 pounds. Furthermore, males can reach an inch taller than their female counterparts.

Regardless of their weight, Skookum cats will weigh roughly half the size of your average household adult kitty.

Interestingly, another common difference between the sexes is their coats. Male Skookums’ coats tend to have much tighter curls than females’. So, if you see a Skookum with tight curls, it may be a male, and contrarily, one with loose locks may be a female.

To begin with, both of Skookum’s parents are relatively pricey cat breeds. Skookum felines, on the other hand, are regarded as highly uncommon breeds, making their costs considerably higher than either of their parent breed’s.

Munchkins regularly sell for about $10,000, while LaPerms go for approximately $500 on average. However, when it comes to owning an adorable little Skookum, be prepared to meet high demands and pay a pretty penny of approximately $2,000.

A Footnote on Skookum Cats

Skookum kitties are more than just their overall adorable personalities and unique appearance. Granted, with their stubby front legs, curly coats, and sweet faces, they have distinct characteristics too.

Their unique windblown locks and affectionate, silly personalities make these kitties adored from all around the world. What do you think of these paw-fect little curl-balls? Have you been so lucky to have met one?

This skookum cat post contains affiliate links. That means if you click through and make a purchase I will most likely receive a small commission. This won’t affect the price you pay. Just wanted to make sure you knew.