Napoleon Cat: 13 Things You Need to Know About This Adorable Feline 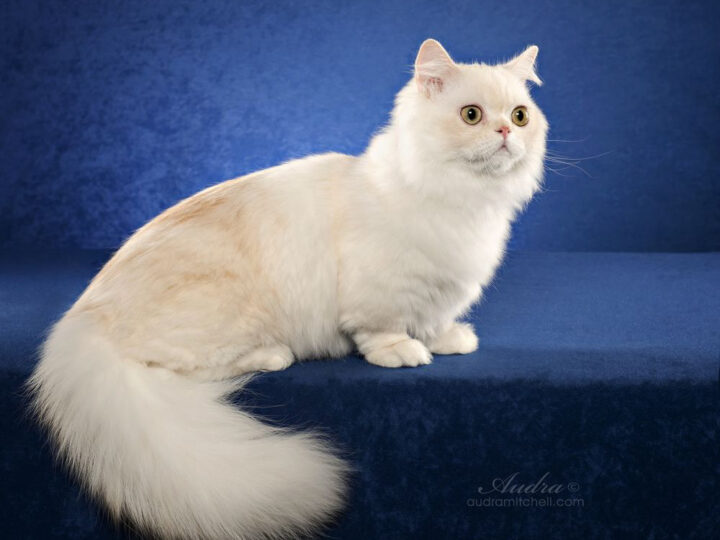 If you’re a cat enthusiast or a parent to these cute pets, you know that there are tons of cat breeds out there. They all have distinct personalities and traits that make them great babies for different kinds of owners. The Napoleon Cat, a relatively new breed, is one of these cats, and they’re incredibly cute.

The short-legged feline is playful and charming, and it also happens to be a velcro cat that loves human company. With its soft fur, I’m sure you’ll also love having the Napoleon around and will never get tired of giving it warm embraces. It’s also great with other pets, regardless if they’re a member of the feline kingdom or not.

Wait, before you add this cutie to your family, there are some things you need to know. I have them all down below, from their origins to their behavior and how best to take care of them.

13 Things to Know About the Napoleon Cat Breed

The Napoleon cat, now known as the “Minuet” breed, has many hilarious, interesting, and wacky facts about it, much like every other cat. As a relatively new breed, there isn’t a lot known about the cat.

Nonetheless, I’ve gathered these facts so you know what you’re getting into before you decide to bring a Napoleon home.

1. How The Napoleon Cat Breed Came to Be

If you’ve seen these small cats, you probably have an inkling as to which breeds they’re a mix of. Their short legs are a dead giveaway of their relation to the Munchkin, while their striking appearance is inherited from the Persian.

This mixed-breed first emerged in 1996, thanks to the founder’s interest in creating more short-legged cats. However, because the short-leg gene is recessive in cats, Minuets exist in both short-legged and long-legged variations.

If you haven’t already guessed it, their original name was inspired by French legend Napoleon Bonaparte. He, just like the Minuet, had a similarly “small” stature that bewildered his opponents. Funny cat fact, Napoleon reportedly disliked (feared) cats.

While that was their original name, it was changed around 2015 by the TICA to the “Minuet.”

The Minuet is a highly affectionate and sweet kitty that loves nothing more than spending time with its family. Their curiosity and playful nature evidently comes from the Munchkin.

If you choose to bring a Minuet home, they’ll love expanding their energy playing with you or with their favorite cat toy.

Their social nature makes them perfect for families with kids or other pets. They hate being left alone, making them ideal for big families or owners who spend a lot of time indoors. This trait mostly comes from the Persian cat.

4. They’re Medium-Sized and Have Variations

The standard Minuet is a medium-sized feline despite its short legs. The non-standard variation can also be considered medium-sized despite towering over the standard breed at the legs.

The Munchkin-Persian cross usually weighs between seven and eight pounds under its coat. When it comes to height, Minuets grow to be about five to seven inches tall. If you’re looking for a cat that isn’t too big, Minuets are a perfect choice.

Since these are average numbers, you may find some coming in even smaller or slightly larger sizes.

5. Their Short Legs Aren’t a Hindrance

It’s typically true that, even in humans, the longer the legs are, the longer the strides, and the quicker you are. So, it’s safe to assume that the Minuet is slow due to its short legs, right?

Wrong. Despite inheriting short legs from the Munchkin breed, Minuets are not sloths. In fact, they can chase balls, lasers, and balls at breakneck speeds.

Much like most cats, they have a great vert that allows them to jump up high whenever they want to perch themselves up.

6. They Are Generally Healthy

The Minuet is seen as a breed that normally has excellent health during its lifetime. Apart from the occasional sicknesses that all cats experience, you won’t be making frequent trips to the vet for emergencies with a Minuet.

However, being a mixed breed means they can suffer from predisposed conditions that their parents suffer from. When shopping for the Minuet of your dreams, ensure they come with a certificate proving they’ve been checked and cleared for polycystic kidney disease. Persians suffer from this disease the most, and it may be inherited by a Napoleon.

Other health concerns to take note of would be cataracts and lordosis.

Napoleons either come with short or long hair. Both variations have different grooming needs you need to know about.

Short-haired Minuets get by with weekly brushing, while the long-haired Napoleons need more frequent brushing. Three to five times per week is a good number to ensure their coats stay beautiful. I recommend getting this handy pet brush to help you in that department.

For bathing, get your Napoleon used to the idea of bathing as early as possible. Use a good shampoo to shower them once every four to six weeks, or when they’re smelly.

Brushing and bathing are also great ways to bond with your furry baby.

8. They Come in Various Colors

Napoleons come in several colors and patterns, thanks to being a mixed breed coming from two different cats. This means you’ll probably find a Napoleon in nearly any color you can think of. Including patterns and shades that aren’t your typical Persian or Munchkin ones.

You can find these cats in mink, chocolate, lilac, bicolor, and more. These doll-faced kitties can also have different eye colors. That includes brown, green, and blue spread across their large eyeballs. In some cases, you may find an intriguing one with two different eye colors.

9. The Napoleon Cat Breed is Adaptable

Thanks to being a mix of two cats on different sides of the active spectrum, these fur babies can adapt to either side, although they usually prefer activity.

The Persian is a much more laid-back kitty with no issues spending its day coiled up in its bed. On the other hand, you get the Munchkin which is super active and requires constant stimulation.

Minuets can be on either side, purrfect for an active owner or somebody who prefers a serene day. While a Minuet is not a couch potato, it won’t be yowling the entire time if you decide to just  watch a Netflix movie. They’ll also be happy to be outdoors playing with you or your kids.

10. They’ll Be Around for a Long Time

If you’re looking for a companion who’ll be around for a long time, then Napoleons are a good choice. While they’re no Balinese, they do have an average lifespan of 12 to 15 years. I’d say this is a good number when compared to other cats.

This means they’ll be around to see your kids transition from toddler to teen. You’ll also get over a decade’s worth of petting the fluffiest fur out there.

Minuets are some of the rarest cats in the world, and as a result, they’re expensive to purchase. Their outer appearance, like their eye color, coat quality, and shape, can inflate their price even further.

While prices vary by breeder, you can expect to pay at least $1,000 to buy the Napoleon. Some even sell them for over $3,000 when they come in the rarer colors. Standard Minuets are more expensive than non-standard ones.

Still, I’d say that they are priceless thanks to the joy they bring to their humans.

When Joe Smith, the original breeder of the cat, first unveiled the Napoleon, he faced a lot of criticism for it. The critiques primarily stemmed from the controversy directed at the two parent breeds, with the Munchkin still an anomaly based on their dwarf gene. Persian issues were focused on the Himalayan and Exotic variations.

The Napoleon cats were under heavy scrutiny from the start, thanks to that fact. The short legs baffled many cat enthusiasts, and they didn’t really approve of it. This issue was prevalent for so long that the cat was only officially registered in TICA in 2016, despite being first bred in 1996.

If you aren’t interested in getting a hard-nosed cat that’s likely to ignore your commands and will take a long time to acclimatize to your home, then a Napoleon is a good option. They’re incredibly docile and people-oriented, traits which make them easy to train.

They’re also seen as intelligent, which helps in this regard too. The key is starting them early so they can shape up into an adorable and intelligent cat that warms your heart.

Ready to Get This Round-Faced Cutie?

Having read the above, I’m sure it’s strengthened your resolve to get a Napoleon cat. After all, they’re cute, smart, and affectionate – all the traits every cat owner surely appreciates.

Their friendly nature makes them great additions to different family groups and sizes; perfect for singles, large families with kids or pets, and everyone in between. What they may lack in legs, they make up for with a big personality. Get yours now and get ready to be showered with love and affection.

This Napoleon Cat post contains affiliate links. That means if you click through and make a purchase I will most likely receive a small commission. This won’t affect the price you pay. Just wanted to make sure you knew.