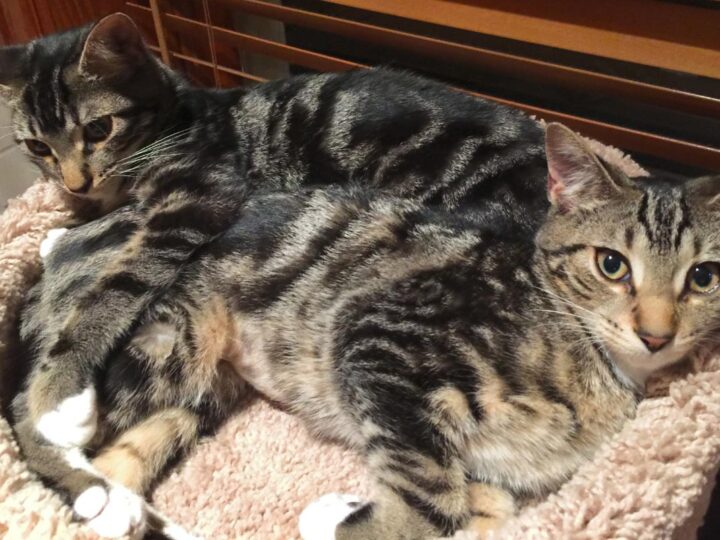 While there are many breeds of kitties that are classified as “rare” or “exotic”, few compare to the stunning looks of the Sokoke cat. This elusive kitty may surprise you with its charming personality, beautiful coat, or quirky antics.

Sokokes can definitely be listed among the more expensive cat breeds, thanks partly to their rarity. There is much to know, learn, and love about this very mysterious breed, so come along as we discover all there is to know about the Sokoke.

Things you need to know about Sokoke Cats

1. Where is Sokoke: a History and Background

While many cat breeds have distinctive, convoluted backstories containing royalty (looking at you, Khao Manee), the Sokoke is much more down-to-earth. Nothing too fancy or obscure in the history of this clawed kitty, but perhaps their mystery has more to do with their rarity.

Names and Numbers: An Origin Story

The first Sokoke cats were found in the greater Arabuko-Sokoke forest (spot any trends?). A wildlife artist and horse breeder named Jeni Slater discovered a litter of the cuties in her backyard. They were clearly domestic, as they were quite bold and used to human interaction.

She then hand-reared a few of the kittens with some help from her staff. Later on, Slater took some over to Europe herself, as well as imported a few extras. This formed the initial foundation that this breed of cuddle bugs was built on.

History of the Rare Breed

As mentioned above, the Sokoke got their name from the forest where they were discovered. Some other names the Sokoke has also gone by over the years include African Shorthair and Sokoke Forest Cat.

The forest is in the coastal area of Kenya, near Mombasa, and was home to a local Kenyan tribe called the Giriama. Some people believe the Sokoke was the sacred cat of the tribe, and that they were very affectionate towards the kitties.

In Relation To – Family of the Sokoke

As distinctive as the Sokoke may be, it is quite possible that they are related to several other natural cat breeds as well. One of these relations is the feral Lamu cat, which is an island-dwelling feline from further north up the Kenyan coast. Another close relative might be the beautiful Egyptian Mau, with their spotted leopard-like coats.

To Breed or Not to Breed

The Sokoke is a natural breed of kitty, which means they were freely bred and “created” through natural means. They were not designed or created from specific breeds, like the Minkskin or the Toyger. They are descendants of a breed of free-roaming feral cats of Kenya.

They are currently known as one of the rarest breeds of domestic cats in the world, because of their limited breeding and relatively unknown status. These purr-fect cats are the epitome of “wild mystery”.

They were first recognized as an official breed in 1993 by the FIF, but today they are fully recognized by four organizations. These are some of the largest, top cat fanciers across the globe, and include:

2. Sokoke Appearance: Pretty on the Outside

The Sokoke has quite a striking quality to its appearance. They are not your average kitties, since they do have a bit of a “wilder” look to their coats and patterns. This is thanks partly to their origins in the forest. These stunners have a few common trademarks that distinguish them from the general cat populace.

The locals in Kenya called them Kadzonzo, which in English means ‘tree bark’. This is because of the quaint, ring-like markings that cross over their bodies. They also have some unusually long ears, as well as a tapered tail.

These, combined with their high cheekbones and light green or amber-colored eyes give them quite the striking facade. They do have similar markings to Bengals and Egyptian Maus, two of the other cat breeds with exotic coat patterns.

Generally speaking, their coats are quite short, with minimal undercoats (thanks to their warm origins in Kenya). This makes them a breeze when grooming, as shedding season won’t bring too much sneezing and allergies.

The Sokoke is mostly brown in color, with well-defined tabby markings and a variety of patterns and shapes that can adorn their coats. A soft cat brush would be the perfect tool to help groom them, giving you a chance to bond with your fancy feline.

Sokokes are a medium-sized breed of claw monster, with a lean and athletic build. Their bodies are quite thin and long, with long legs and a rather small head. They definitely look the part of an “exotic hunter” and you can often see them stalking some invisible prey around the house.

They are lithe cats, very agile on their feet, so be prepared to be pounced on quite often!

6. Sokoke Quirks – Pretty on the Inside

Quirky does not even begin to describe these silly cats, as they have some seriously wonderful personality traits combined with crazy antics. The Sokoke has a unique outlook on life and is definitely something to be prepared for when you are bringing one home.

7. Tip-Toeing Into Your Heart

One of the funnier aspects of their special brand of coo-coo is their gait. They don’t walk around like most cats, instead, they tip-toe around the house. This is thanks to their longer hind legs and it is quite a sight to behold.

This prancing can be quite adorable to watch, so be sure to treat them to a lovely snack to show your appreciation.

Fun Fact: Sokokes can actually be taught quite a variety of tricks, like playing fetch or learning to walk on a leash.

These feline lovers are very much the social Sallys of the cat world. They absolutely love attention and affection, and won’t be shy about expressing it. Sokokes are loving cats, and can often be seen fetching their humans at the door with a chirpy greeting.

Yes, they are vocal kitties and love talking to their family or even other cats. It is easy to fall in love with them, as they easily charm you. Before long you’ll be completely wrapped around their tail. They absolutely adore following you around the house, so be prepared to dodge as these furry missiles zoom around your feet.

Their dog-like exuberance makes them a joy to have in the house, just as long as you are prepared to entertain them. They are inquisitive cats and will explore anything and everything. They will need some extra stimulation during the day because of this curious persona.

Toys, wands, balls, puzzles, and other interactive cat gadgets are your best bet at keeping them (and you) sane and happy. Since they are such a high-energy breed, it is best to adopt them only if you are able to keep up with their zoomies and other silly antics.

When it comes to climbing, it seems like Sokokes and Bengals have to be very closely related. Sokokes, just like their leopard-spotted cousins, are avid climbers and absolutely love exploring every inch of your house, vertical or horizontal.

Their athletic build allows them quite a bit of jumping potential, so multi-leveled cat trees or some cleverly spaced shelves are essential to keep them happy. Remember, even if you don’t provide these types of “height-stimulation”, your Sokoke will still seek it out. Thus, don’t be surprised to see them on top of the kitchen cabinets or the fridge.

A great way to get them going is to have a playroom for them to go bonkers in. You can add a variety of toys, gadgets, cat trees, and platforms for them to tackle. They definitely do not fit into the stereotypical cat mold of sleeping all day.

Tip: It does not have to be anything fancy, special, or expensive. Installing just a few basic shelves (spaced out to provide maximum fun and platforming) is plenty to have your kitty jumping and roaming around.

As is common with most mammal species, it is commonplace for females to provide the main parental role. However, when it comes to the Sokoke, the daddy cat can be quite hands-on (or is that paws-on?) with the kittens.

They can often be seen nesting in the box with their litter, bonding with the little ones. They share this responsibility, so the mothers can take a break and recuperate. It is an adorable thing to witness, as they are genuinely affectionate towards the kittens and keep them warm and safe.

It is quite an uncommon thing, especially for cats, for the males to help raise the kittens. It is also worth mentioning that, if left with the kittens, the mother can often wait several months to wean her kittens. These daddy-cats definitely deserve the award for cat-dad of the year, for their amazing contribution to the family.

12. Babies and Fur-Children: Yay or Nay?

Moving on to children, generally, Sokokes are very mild-mannered and will fare splendidly with young kids. They love the attention and games that come with the younger humans, so your Sokoke will be more than happy to play along.

Just remember to take note, as mentioned they are a high-energy breed. With all the crazy antics, playfulness, and need for social interaction, these cats can be a bit much for some people.

Especially in households with small babies or very young children, it can be tough to have such a spitfire in the house. The same can be said for an elderly owner, a Sokoke would not be the recommended cat for them.

One awesome thing to know is that they do love companionship. Other pets like cats, dogs, or otherwise fur-covered are all perfect playmates for a silly Sokoke.

So there we have it: the rare Sokoke is a cutie that can climb into your heart with ease and elegance. These chatty Cathys will become the center of your home in no time. Keeping up with their silliness is just another wonderful aspect you can expect with this cooky cat.

So, if you are ready to bring a Sokoke into your home, be prepared for a zany bundle of fun. Looking after a new kitten can be daunting, so be sure to read up on some useful tips and tricks to make it easy. Once you got that sorted, all you need to do is bring Mr. Mittens home!

This Sokoke cat post contains affiliate links. That means if you click through and make a purchase I will most likely receive a small commission. This won’t affect the price you pay. Just wanted to make sure you knew.

Lykoi Cat - 16 Things to Know About The Werewolf Cat
← Previous
Why Does My Cat Sleep With Me and Not My Husband? 7 Reasons
Next →
Click here to cancel reply.