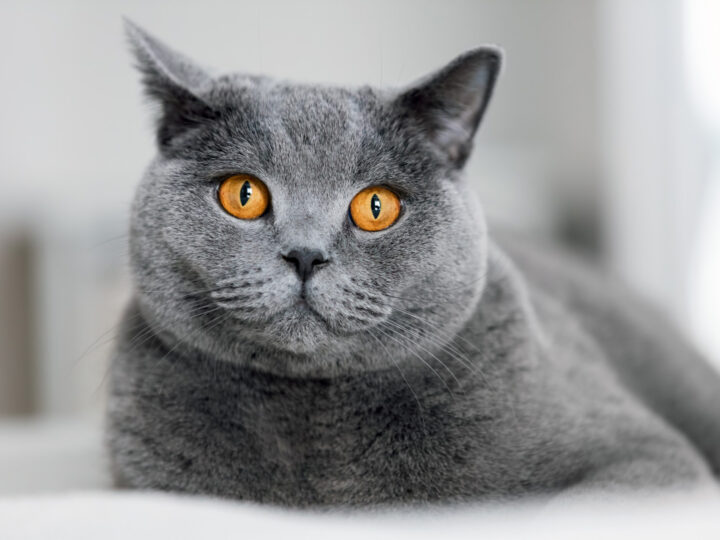 ‘Chinchilla Shorthair Cat’ is a former name for tipped British Shorthair color varieties. These beautiful kitties received their color from their crossbreed with Persian Chinchilla cats and the classic smoke-colored British cats.

These kitties are super unique. They have bright white coats with just the tips of each hair being colored, creating a shimmering effect as they walk. These kitties have a soft, dense, and crisp coat that feels like you’re picking up newly fallen snow.

If you’re looking to find yourself a dazzling, adorable, green-eyed pussycat, British Shorthair (BSH) Chinchillas may just be the perfect kitty for you. Let’s take a look at some interesting things to know about these soft-furred kitties and what makes them so special.

The Chinchilla is one of the most ancient cat breeds to have originated in England. It’s believed these kitties descended from Roman cats and were brought to the British Isles by the Romans.

During the 19th century, interest in pedigree cats flourished, and breeders sought to have these cats recognized. At this time, Norman Winder acquired British Shorthair tipped/shaded cats or Shorthair Chinchillas in the early 1970s. He achieved this by crossbreeding Persian Chinchillas with Silver Tabby British Shorthair cats.

Today, these kitties come in both silver and gold-colored Chinchillas, with beautiful green kohl-rimed eyes.

Fun Fact: British Shorthairs are the inspiration for two of the most well-known fictional movie cats: Puss in Boots and Alice in Wonderland’s Cheshire Cat.

These kitties have broad shoulders, a deep chest, round paws, and a muscular back, giving them an almost chunky, ‘teddy-bear like appearance, often called a cobby. Like with other British cats, Chinchilla British Shorthairs have full jowls, a muscular neck, and a large head.

Their eyes are round and prominent can come in a range of color varieties. These kitties may boast beautiful green or blue-green eyes. The rims of their eyes, nose, and lips are all black, as are their paw pads.

The appearance of these beautiful felines is medium- to large size. Although, Chinchilla British Shorthairs are generally smaller in size and lighter in weight compared to other breed varieties.

The Chinchilla cat is a color classification of the Persian cat. Their undercoats are pure white, and their coats on their back, flanks, head, and tails are sufficiently tipped with black, giving it a sparkling silver appearance.

These adorable, cute, stubby little furballs are super playful and full of energy. And they enjoy tons of games with their owners. BSH Chinchillas develop relatively slowly and reach full maturity around two years old.

British Shorthair Chinchilla cats are easy to care for. They may experience seasonal shedding, so you can brush regularly during these periods to remove loose hair.

They don’t require much grooming care, so a weekly session with a cat brush to keep their coats clean and in good condition will be sufficient.

You can clean their ears with a special ear cleaner for kitties, gently massage it into the ear. It’s also important to check these feline’s teeth and gums. If they need cleaning, you can use a toothbrush with cat toothpaste – cats usually love the taste.

British Shorthair Chinchillas are intelligent, loyal, and loving cats. They are super friendly but tend to become a one-person cat.

These little meow-machines love to talk and express their views, and you’ll often find them trotting around the home from room to room. Furthermore, kitties get on well with other cats and pets.

Another characteristic these kitties possess is stubbornness, and they do not tolerate any attacks on their freedom.

British Chinchillas have more energetic moments and spend the rest of their time lying quietly in their favored lookout spots or supervising the household with large, saucy eyes.

These felines enjoy keeping stimulated with intriguing wand-like toys or puzzles. Contrarily, once these kitties have outgrown active kittenhood, they tend to calm down a lot and prefer a life of dignified response rather than one of acrobatics.

9. These Kitties Are Easy to Train

These kitties are very intelligent and are easy to train. They love learning new tricks and games. And unlike the Siamese cats, for example, these feline’s intelligence doesn’t manifest any problematic behavior.

They can be quickly trained to use the litter box or a scratching post rather than your furniture. Moreover, they will surprise you with their ability to play fetch or giving you a high-five in exchange for a kitty treat.

Diet is essential for keeping any cat in good health – and that includes our beloved BSH Chinchilla kitties. These cats may require a modest intake of high-quality, high-protein foods.

Choose a premium brand of wet kitty food that is high in protein and fairly low in fats. To provide your kitty with sufficient fluid, you can combine wet and dry food to help maintain dental health.

11. They Are Well Suited to be Indoor Kitties

Although these kitties will undoubtedly survive the outdoors, British Shorthair Chinchillas are better suited for the indoors. But, make sure they have lots of toys and activities to keep them entertained.

These kitties are highly intelligent, so you can train them to walk on a lead if you want to.

BSH cats may suffer from some heritable conditions, but this can be found in most cats, too – whether pedigree or mix breed.

Take a look at some common conditions that a British Shorthair Chinchilla may suffer from:

BSH’s life expectancy is a matter of some debate. One study shows a median lifespan of a little under 12 years, and a different study suggests between 14 and up to a ripe age of 20 years.

A Footnote on the British Shorthair Chinchilla

The British Shorthair cats are probably one of the most well-known cat breeds of all time. And the Chinchilla shorthairs are considered to be one of the most unique of them all, from their round eyes and chubby faces to their plush silvery coats.

So, now that we’ve covered some interesting things to know about the British Shorthair Chinchilla do you know of something we may have missed? Please share; we’d love to know.

Why does my cat sit on me?

This British shorthair chinchilla post contains affiliate links. That means if you click through and make a purchase I will most likely receive a small commission. This won’t affect the price you pay. Just wanted to make sure you knew.