11 Terrific Tuxedo Cat Breeds: Is What they Say True? 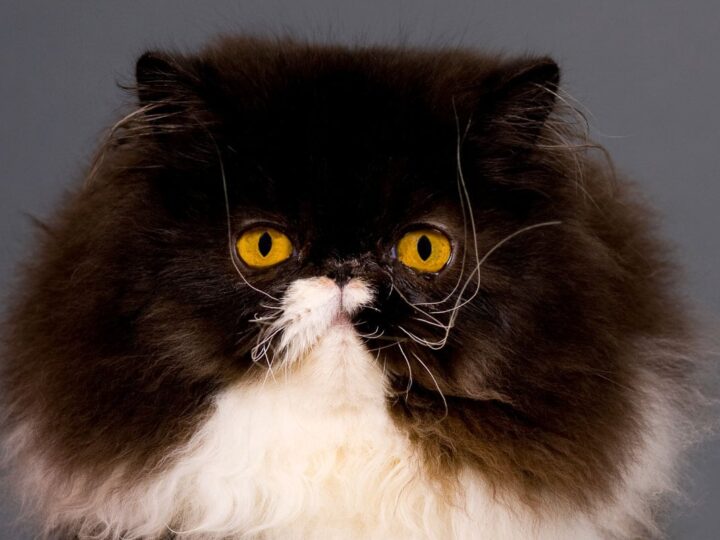 In the world of cat, Tuxedo is a colour rather than a particular breed. However, some breeds can be considered Tuxedo Cat Breeds as they have this pattern more often than others. Alas, there are no cat breeds that are exclusively black and white.

Appropriately, the tuxedo is a pattern on a cat’s coat. Black and white tuxedo cats have been popular in film, tv and advertising over the year – from Sylvester to Felix the Cat.

The colour pattern of a cat is driven by genetics. Tuxedo cats come in several different colour patterns all of which have been named:

There is also quite a bit of mythology around tuxedo cat breeds. Not many of the claims around this breed seem to be validated by a vigorous research process but they are interesting.

These myths include tuxedo cats being the strongest swimmers of all cats, being more intelligent than other cats and that they open their eyes 24 hours before all other types of cats.

Now that you’re up to date with the tuxedo cat breed concept let’s look at the 11 breeds that most commonly produce tuxedo cat patterns.

The British Shorthair cat is a medium to large-sized cat breed with large gold, orange, or copper color eyes, a short, broad nose, and a short to medium coat. Daily grooming of these felines is necessary, especially during seasonal changes.

These lovely kitties are highly intelligent; however, they are still happy to stay inside and play with toys and people. Get some wand-like toys and start a game with your British Shorthair cat; it can be great fun.

This indoor cat breed has an easy-going personality and provides great companionship. While these cats love to play, they don’t require hourly attention.

This very furry breed is best known for something that it doesn’t have – a tail. A cat this furry does require quite a bit of grooming and brushing. But this will be offset by its playful personality.

This is quite a stocky cat, more like a British Short Hair with its rounded head and rounded rear. Their hind legs are longer than their front legs which can give can be clearly seen.

Cymric cats come in a whole range of colours, one of which is the lovely tuxedo pattern. And do note that not every Cymric cat comes with a tail so this may be something that you want to check with the breeder if it is of importance.

These fluffy felines are really something special. Known to be real gentle giants, they’re often referred to as the dogs of the cat world thanks to the unique Maine Coon personality.

So if you’re a self-proclaimed dog person but looking to broaden your horizons, this will be your perfect transition to being a cat owner too.

Maine Coons are friendly, loveable, and very vocal. Their sizable bodies and heavy, double-layer long hair kept them well-protected against the brutal cold in Maine, which is the state they originated from.

With so much personality and love to give, you may soon find yourself leaning towards the Maine Coon breed.

The munchkin’s dog counterpart is undoubtedly the sausage dog, as they share the short-legged trait. This is why these little felines are also called the “sausage cat”.

Considered the original dwarf cat, the Munchkin cat breed is not exclusive and can be linked to a number of other breeds. For example, you can find a Scottish fold munchkin cat or even a Maine coon munchkin cat. It’s all about that short-legged gene mutation.

There is quite a lot of controversy surrounding these sweet looking felines, as there is concern over potential health and mobility issues. They were not considered an official breed for many years and were not allowed to take part in feline competitions.

Even today, there are a number of councils and associations that do not recognize the Munchkin cat breed.

However, most sources say that the shortness of their legs does not affect the Munchkin’s running and leaping abilities. Also, they are not generally found to have more joint or bone problems than other cat breeds. So, if you are passionate about their little legs, your ethics needn’t be compromised.

The personalities of Munchkin cats are generally sweet, outgoing, and intelligent. They also respond well to being handled, which is lovely, as you’ll undoubtedly want to hold these cuties all day long.

This sweet and loving breed of course originates from Japan. Apparently in the 1600s Japanese street cats were bobtails. The breed is considered to be lucky and its owners should prosper.

Statues of tri-colour Japanese Bobtail cats are quite common in Japan (these are supposed to be the luckiest Japanese Bobtails of all!). So when you see the familiar statue with the kitty raising its paw up and down you now know that you are looking at a Japanese bobtail cat.

The breed is named bobtail due to its short and stubby tail. They were also adored by the Japanese Imperial family and still have a regal air to them. This means that your home – and the items wihin it – are part of their Kingdom.

I loved this quote that I found on Wikipedia about Japanese Bobtail cats:

German doctor Engelbert Kaempfer wrote, “there is only one breed of cat that is kept. It has large patches of yellow, black and white fur; its short tail looks like it has been bent and broken. It has no mind to hunt for rats and mice but just wants to be carried and stroked by women.”

Scandanavian and from a forest – this is one on trend breed of kitty! Whilst the Norwegian Forest Cat loves to play it is also very happy to hang out on its own and won’t follow you around when you get home.

Larger than your average cat, the Norwegian Forest Cat Breed are rather elegant kitties. They have long legs and bushy tails that are often as long as their bodies.

When their coat has fully come in they are a sight to behold. They often come out in a full mane, fluffy chest, furry legs and even tufts of fur between their toes.

As a result, these friendly cats do require daily grooming. Their ears also often get tufts of fur which needs to be groomed. The Norwegian Forest Cat actually has a double coat with one being weatherproof.

Persian cats are affectionate, docile, and gentle kitties. This breed has a quiet demeanor; they plop down on any soft surface and simply pose for your appreciation. These elegant cats are not very active, which makes them the perfect indoor pet.

Persians have a relatively small face so their big round eyes are particularly prominent. Most Persians have gorgeous blue eyes but their can be exceptions – or some who have a different colour in each eye.

Although affectionate, Persian cats are discriminative and reserve their attention for family and a few trusted guests.

This beautiful flat flaced cat breed does get along with children and other household pets; however, they aren’t fans of loud environments but rather serene homes where little changes.

Turkish Angora cats are known for their long, silky coats which often become the longest around the cat’s neck. They are an adorable combination of large ears, almond-shaped eyes, and a small to medium-sized head.

The most common eye colour for a Turkish Angora cat is blue. However, they can also have amber, green or gold eyes as well.

Originally from Turkey (you may have guessed this), the earliest records of the Turkish Angora cat are from the 16th century. However, the breed began to disappear in the early 19th century.

The Turkish Angora was bred at the Ankara Zoo to preserve its pedigree and breed was officially established in North America in the 1970s.

These friendly and gentle cats also have a more boisterous side and love run, jump and explore. He loves to play and will do almost anything to get your attention.

This cat breed will maintain the playfulness they exhibit as kittens throughout their lives. They will enjoy curling up next to you and on you on both the couch and your bed.

The Cornish Rex cat breed has no hair apart from some down. Their coat is very fine and can sometimes get a bit of a curl. The lack of fur can emphasise those big eyes even more.

This cat breed is often compared to greyhound dogs due to their sleek appearance and they like a long, lolling run. This is a very adventurous breed that loves to explore and will keep its playful demeanor long after its kitten days are finished.

My own feline friend, Alexei, is a Siberian, so I’m particularly partial to this amazing breed. With a thick, luxurious coat, stunning colors and affectionate personality, Siberians are well-suited to any home.

⇒ An entertained cat is a happy cat. Check out my posts on 9 Best Treats for Cats, Ultimate Guide to Gifts for Cats, 6 Best Toys for Cats, 27 Beautiful Cat Ornaments, 14 Best Cat Chew Toys, Clothing for Cats, and Best Costumes for Pet Cats.

They’re laid-back but enjoy playing, and are very attached to their humans. You’ll often find your Siberian cat following along behind you and cuddling up as soon as you take a seat.

As you may expect, this loving cat comes from Siberia in Russia, so they’re well suited to cold conditions. It’s an ancient breed thought to be ancestral to all modern long-haired cats. That’s quite the pedigree.

These happy kitties are affectionate, healthy, and talkative. The name refers to the unique ears of the American Curl Cat, which curl backward in a particularly sweet way.

Like the Wirehair cats, American curl cats are all descended from a single natural genetic mutation. They’re one of the youngest cat breeds, having moved from stray to pedigreed in just six years.

Curious, clever, and people-loving, the American Curl is perfect for families. They love to greet people with a little head bump or a rub against the legs. Curls are also active and adaptable, with older Curls known to be just as active as younger ones.

Please Note: This tuxedo cat breeds post contains affiliate links. That means if you click through on most of the links and end up making a purchase I will receive a small commission. This will not affect the price that you pay. I wanted to make sure that you were aware of this.